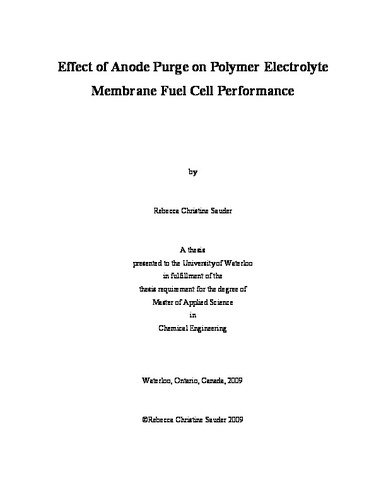 Polymer Electrolyte Membrane Fuel Cells (PEMFC) are promising power generating devices that use an electrochemical reaction to convert the energy from hydrogen fuel into usable electricity. One cell produces a small voltage so many cells are combined in series in order to produce a useful voltage, this configuration is referred to as a stack. Hydrogen is supplied to the anode of the stack in amounts greater than the electrochemical reaction requires to guarantee that enough hydrogen is available for every cell in the stack and to provide enough pressure throughout the cell flow channels for good mass transfer. For reasonable fuel efficiency, the anode outlet gas containing unconverted hydrogen is recycled (or recirculated) back to the anode inlet. PEMFC performance is highest when pure hydrogen fuel is supplied, however, nitrogen at the cathode will permeate through the membrane and accumulate in the anode gas with recirculation. Nitrogen buildup dilutes the hydrogen gas which adversely affects fuel cell performance at the anode. Also, in practical applications hydrogen-rich gas produced from reformed methane, called reformate, is used as the fuel. Reformate contains impurities such as, nitrogen, carbon dioxide, carbon monoxide, and sulfur compounds. This thesis will focus on trace levels of carbon monoxide entering in the hydrogen fuel stream, and the impact of contaminant build-up due to anode recirculation. Carbon monoxide adsorbs readily onto the platinum catalyst sites, called poisoning, thus decreasing PEMFC performance. In efforts to minimize the buildup of impurities and crossed over nitrogen, a portion of the anode outlet gas is periodically and continuously purged to the exhaust. How often the outlet gas is purged depends on a variable called the purge fraction. The purpose of this research is to study the effect of purge fraction on PEMFC performance, measured by the average cell voltage, for a Hydrogenics 10 cell stack. The operating parameters used for testing and the experimental apparatus were designed to mimic a Hydrogenics 8kW Hydrogen Fuel Cell Power Module. A pump connected between the anode outlet and anode inlet form the anode recirculation loop. In Phase 1 of the test program the effect of purge in the absence of carbon monoxide was studied to see if hydrogen dilution from nitrogen crossover and accumulation would cause significant cell voltage degradation. In Phase 2 the effect down to 0.2 ppm carbon monoxide was evaluated. The results showed that nitrogen buildup, in the absence of carbon monoxide, did not significantly penalize the cell performance in the range of purge fractions tested. However, for the same purge fraction but with as little as 0.2 ppm carbon monoxide present, the voltage loss was significant. A discussion of the effect of purge on the impurity concentration and the associated cell voltage degradation is detailed with particular emphasis on carbon monoxide poisoning.