The Modelling of Biological Growth: a Pattern Theoretic Approach 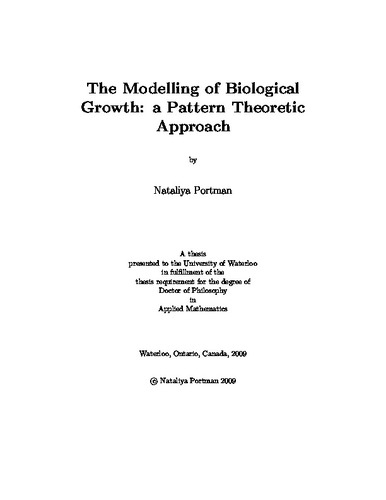 Mathematical and statistical modeling and analysis of biological growth using images collected over time are important for understanding of normal and abnormal development. In computational anatomy, changes in the shape of a growing anatomical structure have been modeled by means of diffeomorphic transformations in the background coordinate space. Various image and landmark matching algorithms have been developed for inference of large transformations that perform image registration consistent with the material properties of brain anatomy under study. However, from a biological perspective, it is not material constants that regulate growth, it is the genetic control system. A pattern theoretic model called the Growth as Random Iterated Diffeomorphisims (GRID) introduced by Ulf Grenander (Brown University) constructs growth-induced transformations according to fundamental biological principles of growth. They are governed by an underlying genetic control that is expressed in terms of probability laws governing the spatial-temporal patterns of elementary cell decisions (e.g., cell division/death). This thesis addresses computational and stochastic aspects of the GRID model and develops its application to image analysis of growth. The first part of the thesis introduces the original GRID view of growth-induced deformation on a fine time scale as a composition of several, elementary, local deformations each resulting from a random cell decision, a highly localized event in space-time called a seed. A formalization of the proposed model using theory of stochastic processes is presented, namely, an approximation of the GRID model by the diffusion process and the Fokker-Planck equation describing the evolution of the probability density of seed trajectories in space-time. Its time-dependent and stationary numerical solutions reveal bimodal distribution of a random seed trajectory in space-time. The second part of the thesis considers the growth pattern on a coarse time scale which underlies visible shape changes seen in images. It is shown that such a "macroscopic" growth pattern is a solution to a deterministic integro-differential equation in the form of a diffeomorphic flow dependent on the GRID growth variables such as the probability density of cell decisions and the rate of contraction/expansion. Since the GRID variables are unobserved, they have to be estimated from image data. Using the GRID macroscopic growth equation such an estimation problem is formulated as an optimal control problem. The estimated GRID variables are optimal controls that force the image of an initial organism to be continuously transformed into the image of a grown organism. The GRID-based inference method is implemented for inference of growth properties of the Drosophila wing disc directly from confocal micrographs of Wingless gene expression patterns.