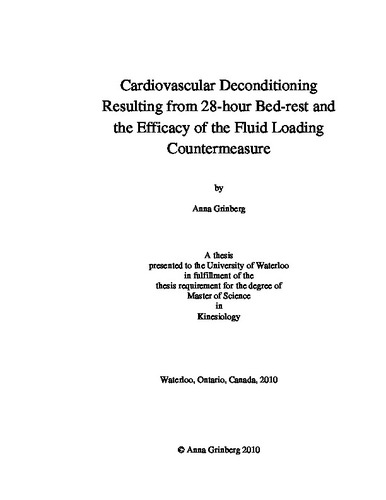 This study tested the hypotheses that 1) 28h head-down bed-rest (HDBR) would result in significant hypovolemia and cardiovascular deconditioning, and that 2) NASA’s fluid loading protocol (ingestion of 15 ml/kg water with a 1g NaCl for every 125ml of water consumed) would restore normovolemia and prevent cardiovascular deconditioning resulting from 28h HDBR. Nine healthy men were tested in 5 testing scenarios, with a progressive lower body negative pressure (LBNP) protocol performed before and after each scenario to measure the subjects’ cardiovascular responses to orthostasis. Subjects were tested in two 28h HDBR conditions, without fluid loading (NFL) and with fluid loading (FL), as well as in three 4-hour control conditions to isolate the effects of circadian rhythm, HDBR, and fluid loading. After 28h NFL HDBR, plasma volume was reduced by 8%. There were no symptoms of syncope during orthostatic testing following 28h NFL HDBR, however cardiovascular deconditioning was apparent as there were significant increases in heart rate, reductions in central venous pressure, and reductions in portal vein diameter during LBNP testing. There were no changes in stroke volume, cardiac output, systemic vasoconstriction, cardiac measures, and arterial and cardiopulmonary baroreflex responses, and no evidence of splanchnic or venous pooling. This study also found that NASA’s fluid loading protocol was ineffective at restoring normovolemia after 28h HDBR, as there were no differences in plasma volume between 28h FL HDBR post and 28h NFL HDBR post tests (p=0.22). Cardiovascular deconditioning was not prevented by fluid loading as the heart rate response remained elevated and central venous pressure remained reduced after 28h FL HDBR. In addition, four of the nine subjects experienced nausea during administration of the fluid loading protocol prescription and two subjects vomited, further evidence that NASA’s fluid loading protocol is not effective at preventing orthostatic hypotension. Investigation of control models verified that deconditioning was the result of HDBR. It was also concluded that circadian rhythm did not affect the measured cardiovascular responses and the fluid loading protocol was ineffective at increasing blood volume in the absence of HDBR.