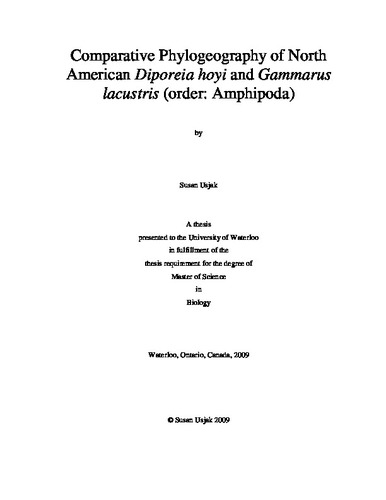 This thesis examines the phylogeographic distribution of both Diporeia hoyi and North American populations of Gammarus lacustris. The first section of this thesis investigates the genetic distribution and species composition of actively dispersed Diporeia within the Laurentian Great Lakes. A phylogeographic analysis of Diporeia across glaciated North America concluded that there was no evidence to suggest the existence of two or more phylogenetic species and that all contemporary populations were colonized from either the Missourian or Mississippian refugia (average of 1.75% mtDNA divergence between the two). Investigations into the phylogenetic history of Diporeia revealed that it represents an ancient genetic lineage that began to independently evolve from Monoporeia affinis approximately 15.4 Mya and that the two diverged from Pontoporeia femorata during the early Miocene. Populations of P. femorata consist of two markedly divergent genetic lineages and represent a cryptic species complex. Low levels of mtDNA sequence divergence (1.41% average) was detected between G. lacustris haplotypes and is a result of its recent invasion into North America from Asia. Gammarus lacustris in unglaciated regions of the USA contained a greater level of genetic divergence between geographically close populations then those examined in glaciated regions, which showed widespread distributions of a few haplotype groups. Southern populations were initially established by random colonization events, whereas in glaciated regions G. lacustris could also actively disperse via the proglacial lakes.