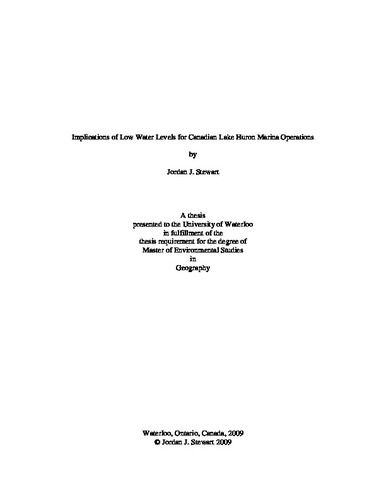 Recreational boating in the Great Lakes is suggested to fuel tourism and the Ontario economy. Like many other tourism sectors, boating-tourism is a highly climate-sensitive economic sector which significantly relies upon compromising climatic conditions. Climate change in the 21st century is projected to alter climatic parameters in the Great Lakes region, thereby generating low lake water conditions and inadequate water levels within some marina facilities that cater to recreational boats. This study examines the multiple implications lakeside marina facilities have previously endured during low water conditions and the possible implications they may experience during three scenarios of water level reductions as a result of climate change. Among the five Great Lakes, Lake Huron has become one of the most prominent lakes for understanding the relationship between climate variability and water-level fluctuations. A questionnaire was administered to 58 marina operators on the Canadian Lake Huron coastline. The questionnaire results were analysed, indicating implications Lake Huron marina operators experienced at their facilities during low water conditions and methods of adaptation that they used to overcome these conditions. The results also projected future implications that may result from climate change and reduced water levels. The most imminent impacts Canadian marina facilities on the Lake Huron coastline would endure as a result of climate change and low water conditions would be the loss of docking slips and potential marina closures. Without adaptation of marina infrastructure, future implications on some Lake Huron Canadian marina facilities may cause substantial economic loss for nearby communities and businesses. Economic losses resulting from lake level water reductions and reduced boat-based expenditures for two regions located on Lake Huron's Georgian Bay shoreline are derived in the study. It is anticipated that the results of this study will provide significant groundwork for systematic and regional evaluations on the impacts in which climate change has upon Great Lake marinas and boat-based tourism.