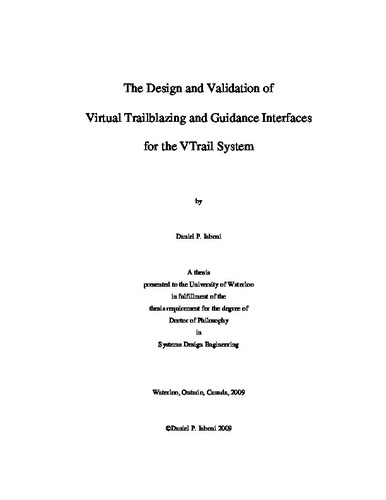 Wayfinding is a complex skill and the lack of tools supporting the specific sub-types of navigation hinders performance in large-scale virtual environments and consequently can slow the adoption of virtual technology for training. The VTrail System is designed to support virtual training by providing trainers (trailblazers) with the ability to create trails to guide users (trail followers) during training simulations. Without an effective interface to assist with creating trails, the task of trailblazing remains difficult. The objective of this research was to design a default interface for the VTrail System that adheres to the basic human factors engineering guidelines of simplicity, universality, and that does not interfere with primary task performance. Two studies (trailblazing, trail following), with a total of four experiments, were performed to evaluate and modify the proposed interfaces. The first experiments in each study determined that the proposed default interfaces are simple enough to use so as to not interfere with primary task performance. The second set of experiments found that, aside from the interface components included in the default interface, novice trailblazers and trail followers did not make use of any additional wayfinding aids when users were provided with the ability to create a custom interface. Secondary benefits included; the development of a novel approach for measuring spatial knowledge acquisition (called the SKAT), a set of criteria for qualitative analysis of trail quality in the form of the Trail Quality Questionnaire (referred to as TQQ), and improved understanding of the role individual differences, such as gender and spatial ability, in wayfinding performance. The high correlation between spatial ability score and performance on the SKAT suggests that the test provides a valid means of measuring spatial knowledge acquisition in a virtual environment. A measurable difference in the trail quality between males and females indicates that the TQQ can distinguish between trails of variable quality. Finally, there are measurable gender performance differences, despite similar levels in spatial ability between the genders. With the proposed interface designs the VTrail is closer to being ready to be incorporated as a support tool into virtual training programs. In addition, the designs for the VTrail System can be adapted for other platforms to support trailblazing in a range of applications, from use in military operations to providing an enhanced tourism experience. This research also serves as a starting point for future research projects on topics ranging from improving the design of the SKAT measure to understanding the effect of expertise on trailblazing performance.

Daniel Iaboni (2010). The Design and Validation of Virtual Trailblazing and Guidance Interfaces for the VTrail System. UWSpace. http://hdl.handle.net/10012/4895