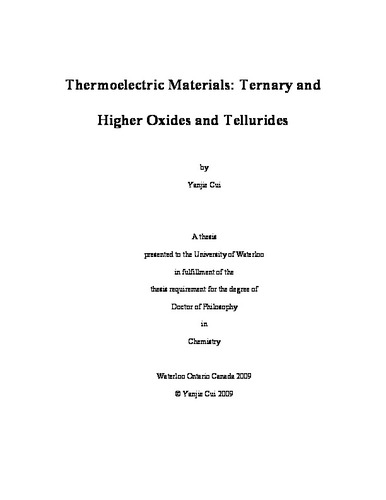 Thermoelectric power generators can convert a temperature gradient into electrical energy, serving as a new energy resource by utilizing solar energy or by utilizing more waste heat. Thermoelectric coolers have the advantage of no moving parts, are quiet and release no gases that are harmful to the atmosphere, in contrast to compression-based refrigeration. While the low efficiency of “classical” thermoelectric devices limits their wide applications, the exploration of better thermoelectric materials is of great importance to improve the efficiency of thermoelectric devices. Good thermoelectric materials are usually narrow band gap semiconductors with a large Seebeck coefficient, reasonably high electrical conductivity and low thermal conductivity. This thesis deals with the exploration of new thermoelectric materials based on transition metal tellurides and the optimization of bulk materials based on oxides of low toxicity and high stability in air. In the first project, seven new ternary or quaternary tellurides, crystallizing in three different structure types, were synthesized and characterized. Single crystal X-ray diffraction was used for crystal structure determination; powder X-ray diffraction and energy dispersive X-ray analysis (EDAX) were used for phase and composition analyses. Physical properties of these compounds were predicted by electronic structure calculations and confirmed by physical property measurements. In the second project, two series of n-type doped perovskite SrTiO3 were prepared in a high temperature tube furnace under dynamic high vacuum of the order of 10–6 mbar, namely SrTi1-x(Nb,Ta)xO3, and Sr1-xLaxTi1-x(Nb,Ta)xO3. The phase purity was characterized by means of powder X-ray diffraction and electron probe micro analysis (EPMA). Rietveld refinements were performed to check for purity and symmetry reduction. The physical properties, such as Seebeck coefficient, electrical conductivity, and thermal conductivity, were measured at high temperatures for all the samples. Of the series of Nb/Ta-doped strontium titanates SrTi1-x(Nb,Ta)xO3, SrTi0.90Ta0.10O3 exhibits the highest ZT value, namely 0.17 for at 752 K. Of the double substituted series, Sr0.99La0.01Ti0.99Ta0.01O3 was best with ZT = 0.13 at 660 K. The rapid increases imply that higher ZT values are likely to occur at higher temperatures.