The effect of a protein-restricted diet during pregnancy on the expression of the amino acid transporter System B0,+ in early rat embryos 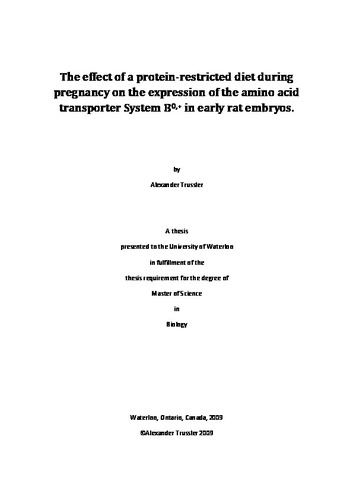 Epidemiological studies have shown that human adults have a higher chance of developing various metabolic disorders, such as type II diabetes and hypertension, due to maternal under nutrition. The concept that conditions encountered in early development can have far reaching implications for an individual’s adult life is known as the Developmental Origins of Health and Disease (DOHaD) hypothesis. In vitro studies have shown that if the amino acid leucine is not available at a high enough concentration the embryo will not exhibit normal trophectoderm protrusive activity which precedes implantation. The amino acid transport system System B0,+ is the main gateway into these cells for leucine but its expression at the transcription level has never been shown in preimplantation blastocysts. We investigated System B0,+ expression in preimplantation blastocysts from dams fed a control versus a low-protein isocaloric diet (18% and 9% casein, respectively). Using RT-PCR to detect the System B0,+ transcript, ATB0,+, we found that indeed there is expression of this amino acid transporter in the pre-implantation rat blastocyst. Due to the gender-specific nature of many DOHaD phenomena, the blastocysts were sexed using gender specific primers and a nested PCR approach. Quantitative real time PCR (qRT-PCR) results show no significant difference in ATB0,+ expression in blastocysts taken from dams fed either diet (9% n= 56, 18% n = 52; 7 dams from each diet group). Furthermore, separating the data by gender reveals no significant difference in expression. However, while not significant, there does appear to be a trend in the protein restricted blastocysts towards increased transcription of ATB0,+, suggesting System B0,+ may be responding at the transcription level to the diet. This could be part of the predictive adaptive response leading to a reprogrammed phenotype as described by the DOHaD hypothesis. Further work is needed to elucidate System B0,+’s role in developmental programming.

Alexander Trussler (2010). The effect of a protein-restricted diet during pregnancy on the expression of the amino acid transporter System B0,+ in early rat embryos. UWSpace. http://hdl.handle.net/10012/4892