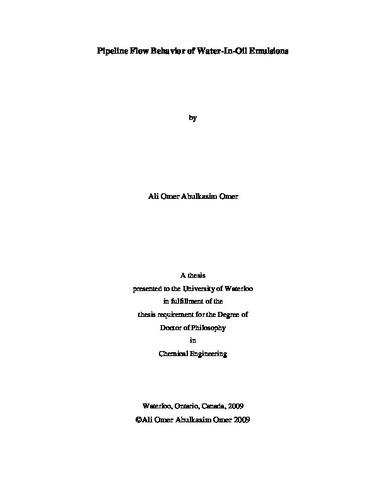 Water-in-oil (W/O) emulsions consist of water droplets dispersed in continuous oil phase. They are encountered at various stages of oil production. The oil produced from an oil-well usually carries a significant amount of water in the form of droplets. In enhanced oil recovery techniques involving the injection of polymer solution, the aqueous phase of the water-in-oil emulsions produced from the oil well consists of polymeric additive. A good understanding of the flow behavior of emulsions in pipelines is essential for the design and operation of oil production-gathering facilities and emulsion pipelines. A number of studies have been reported on simultaneous flow of oil and water in pipelines. However, the studies reported in the literature are mainly focused on either oil-water flow patterns and separated flows (annular and stratified flow of oil and water phases) or oil-in-water (O/W) emulsion flows. The pipeline flow of water-in-oil (W/O) emulsions has received less attention. Also, little work has been carried out on the effect of additives such as polymer. In this study, new experimental results are presented on the pipeline flow behavior of water-in-oil (W/O) emulsions, with and without the presence of polymeric additive in the aqueous phase. The emulsions were prepared from three different oils, namely EDM-244, EDM-Monarch, and Shell Pella of different viscosities (2.5 mPa.s for EDM-244, 6 mPa.s for EDM-Monarch, and 5.4 mPa.s for Shell Pella, at 25 0C). The water-in-oil emulsions prepared from EDM-244 and EDM-Monarch (without any polymeric additive in the dispersed aqueous phase) exhibited drag reduction behavior in turbulent flow. The turbulent friction factor data of the emulsions fell well below the standard Blasius equation for smooth pipes. The water-in-oil emulsions prepared from EDM-244 exhibited stronger drag reduction as compared with the EDM-Monarch emulsions. The Shell Pella emulsions (w/o type) did not exhibit any drag reduction in turbulent flow; the friction factor data followed the Blasius equation. The Shell Pella emulsions were more stable than the EDM-244 and EDM-Monarch emulsions. When left unstirred, the EDM-244 and EDM-Monarch emulsions quickly coalesced into separate oil and water phases whereas the Shell Pella emulsions took significantly longer time to separate into oil and water phases. The Shell Pella oil emulsions were also milkier than the EDM emulsions. The addition of polymer to the dispersed aqueous phase of water-in-oil emulsions had a significant effect on the turbulent drag reduction behavior. Emulsions were less drag reducing when polymer was present in the aqueous droplets. The effect of surfactant on the pipeline flow behavior of water/oil emulsions was also investigated. The surfactant-stabilized water-in-oil emulsions followed the single phase flow behavior. The presence of surfactant in the emulsions caused the dispersed droplets to become significantly smaller. It is believed that the droplets were smaller than the scale of turbulence when surfactant was present and consequently no drag reduction was observed.