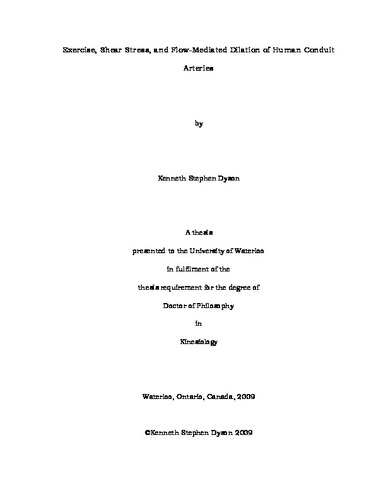 Flow-mediated dilation (FMD) refers to the relaxation of vascular smooth muscle and the subsequent dilation of the vessel in response to increases in shear stress on the endothelial lining accompanying increases in blood flow. The phenomenon has been shown to be endothelium dependent and as such is used clinically and experimentally as an index of endothelial health. FMD can be assessed by imaging a conduit artery with ultrasound during a period of reactive hyperaemia, typically following a period of prior blood flow occlusion achieved by the inflation of a pneumatic cuff around the limb distal to the imaging site. Previous studies have shown that the health of the endothelium is predictive of the health of the cardiovascular system as a whole. This thesis set out to scrutinize the FMD test as a marker for endothelial health by testing the following five hypotheses: 1. A short burst of high shear is not adequate to elicit the FMD response. 2. Brachial artery dilation following 15 minutes of occlusion is a clearer indicator of endothelium dependent FMD than 5 minutes of occlusion with exercise. 3. Oscillating the post occlusion shear stress will decrease FMD compared to unidirectional shear). 4. Heavy dynamic hand grip exercise 6 minutes before an occlusion-only FMD protocol will result in an enhanced FMD response. 5. Long term bed-rest inactivity will attenuate the FMD response and an exercise program will preserve endothelial function. The experiments documented in Chapter 2 found that a 20-s shear stress stimulus following 15 min of forearm circulatory occlusion was not adequate to induce an FMD response compared to longer durations of shear and there was a progressive reduction in FMD when the magnitude of the initial peak shear was reduced by limiting the duration of prior occlusion. Also, the FMD response was correlated with the total shear to time of peak diameter for all shear durations and peaks that were studied while the same was not true of peak shear. In Chapter 3 it was revealed that an uncoupling of the shear-to-dilation ratio occurred when dynamic exercise was added to the FMD test as both 15 min of occlusion (15OC) and 5 min of occlusion with 1 min of exercise (1EXin5OC) yielded similar FMD responses, even though the shear stimulus was increased with the addition of exercise. Increased plasma nitrite during hyperaemia was observed only in the 15OC protocol, suggesting that the exercise in the 1EXin5OC protocol initiates dilatory mechanisms that are not as heavily reliant on the shear sensitive nitric oxide pathway . In Chapter 4 it was shown that 5 min of intense dynamic hand grip exercise (5EX) produced a greater dilation than either continuous (15OC) or intermittent (IO) shear following 15OC. Total shear to the time of peak diameter (AUCshear) and peak shear were both correlated to %dilation following 15OC; however this relationship was lost during 5EX and IO. The results of this study echoed the suggestion in Chapter 3 that there was an uncoupling of the intensity of the shear stimulus and the magnitude of vasodilatation when exercise was introduced, and adds that it may be in part due to the oscillatory nature of the shear profile during exercise. The acute effects of local exercise on the FMD response following 15OC were examined in Chapter 5. FMD in the brachial artery was blunted following dynamic hand grip exercise, even though the shear stimulus was greater during PostEX. Nitrite was significantly elevated in CON at 15s while PostEX nitrite was significantly elevated at 30s post cuff release but not different from CON at 15s. The results of this study suggested that prior exercise had a negative effect on FMD which may be related to exercise blunting post occlusion endothelial N ̇O production. Chapter 6 examined the effect of 56 days of head-down tilt bed rest (HDBR) and an exercise countermeasure on conduit artery FMD following release of distal limb ischemia and NMD following sublingual administration of 0.3 mg of nitroglycerin. HDBR without EX decreased the resting diameter of the popliteal artery while EX increased the diameter. HDBR had no effect on the resting diameter of the brachial artery. FMD was elevated in all groups for the brachial but only in the non-exercisers for the popliteal. When change in resting diameter was taken into account the preserved FMD in EX was removed. NMD was not altered by HDBR in any group. There was enhanced endothelial function relative to intrinsic dilatory capacity in both the brachial and popliteal arteries post HDBR. The results from Chapter 2 support hypothesis 1, showing that a 20 second burst of high shear stimulus was not adequate to elicit the FMD response during reactive hyperaemia. It is not clear whether hypothesis 2 was supported or not given that the results from Chapter 3 showed on the one hand that the %FMD did not change with the addition of exercise in the occlusion but on the other hand the shear to dilation ratio was altered. The finding, in Chapter 4, that FMD was not reduced when the hyperaemia was intermittent does not support hypothesis 3. In opposition to hypothesis 4, Chapter 5 showed that %FMD was reduced following bouts of heavy hand grip exercise; however the absolute magnitude of vessel diameter was similar in both post exercise and control tests. Finally, hypothesis 5 was also contradicted, with Chapter 6 showing that long term bed-rest enhanced rather than attenuated the FMD response in both arm and leg arteries, while an exercise countermeasure preserved pre-bed-rest FMD in the legs only. In addition to the specific hypotheses tested, there was evidence that acute exercise evoked dilatory mechanisms in the conduit arteries that were not shear/endothelium dependent given that the shear to dilation relationship was uncoupled during, following, and in occlusion protocols that include exercise. The precise mechanisms by which this is achieved are still unknown, but it may be partially due to the oscillatory nature of the elevated blood flow during exercise. I conclude that inference of cardiovascular health from endothelial function by the evaluation of %FMD should be approached with caution, especially in the event that physical activity is involved.