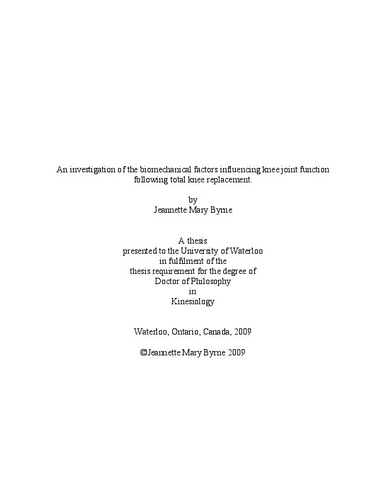 Knee replacement surgery is often performed in cases where the pain due to knee osteoarthritis can no longer be effectively controlled by conservative measures. The surgery—which replaces the articular surfaces of the tibia, femur and sometimes the patella with a mix of metal and polyethylene—is one of the most commonly performed lower limb surgeries. Despite patient reports of reduced pain and increased participation in activities of daily living, knee function following total knee arthroplasty (TKA) does not return to normal. Reductions in both passive and active knee range of motion, alterations in magnitude and timing of muscle activity, and changes in knee joint kinetics have all been reported. Comparatively little is known about why knee function is altered following TKA. In an attempt to address this gap in the literature, this thesis was designed to examine the biomechanical factors thought to contribute to reduced knee extensor moments following TKA. In particular, the contribution of alterations in passive knee moments, muscle moment arm lengths, and muscle activation magnitude and timing were examined in detail to determine which factors contributed to reduced knee extensor moment following TKA. To accomplish this goal, two groups--6 healthy controls and 6 individuals who were at least one year post-TKA—were examined in four different studies. The initial study of this thesis, a comprehensive examination of patients and controls during gait and stepping onto a raised surface, had two purposes. This moment data was needed to clearly define the knee moment deficits that existed in the patient – the remainder of the thesis focused on determining why these specific deficits existed. A secondary aim of this first study was to allow for the assessment of muscle activation patterns in this population during weight bearing tasks. Results of study one confirmed the existence of knee extensor moment deficits in the TKA group and also demonstrated that patients exhibited increased gastrocnemius EMG, prolonged stance phase activation of biceps femoris and reduced knee flexion during the loading phase of stance. Analysis of results across the two tasks suggested that reduced knee moments in members of the TKA group may be related to changes in gastrocnemi activation, however, differences in knee joint kinematics between patients and controls made it difficult to draw this conclusion. Study number two was designed to further probe the muscle activation strategies adopted by members of the TKA group. In order to avoid complications involved when comparing muscle activation patterns between groups using different kinematic strategies, seated knee extension was examined. This task was chosen as it challenged the knee musculature while at the same time restricting both groups of participants to use the same knee joint kinematics. The results of this analysis revealed that, while EMG magnitude for quadriceps and hamstrings were similar for both groups, patients exhibited increased amplitude of EMG in both the medial and lateral gastrocnemi. While the first two studies of this thesis focused on the active knee joint moment, in the third study the force required to passively move the knee from a flexed to an extended position was measured and used to estimate the passive moment of the knee joint. This study was based on the rational that if the passive knee moment was altered following TKA it could potentially affect the net knee joint moment. The comparison of patient and control results showed that, while small changes in passive moment were evident in patients, these differences were not large enough to account for changes in the knee extensor moment. The goal of the final thesis study was to examine moment arms of the knee musculature in an attempt to determine if TKA resulted in changes to this variable. However, various methodological issues arose in the course of completing this study. As a result, limited data were produced that sufficiently addressed the question posed. Despite the problems that arose, important issues regarding in vivo moment arm determination were realized and are included for discussion in this thesis. Together, the four studies provided a unique opportunity to observe knee function over a range of activities. The following conclusions were reached. • Changes in passive knee moment did not seem to contribute to reductions in knee extensor moment observed following TKA. • Quadriceps and hamstring muscle function, as evidenced by EMG recording during the seated knee extension task, appeared intact following TKA, suggesting that alteration in the function of these muscles were not directly responsible for reductions in knee extensor moments. • Changes in medial and lateral gastrocnemi activation were observed during knee extension and weight-bearing tasks. These changes may account for reduced knee extensor moment, particularly during the step-up task. • Knee extensor moment reductions during gait appear to be related to the reduced knee flexion exhibited by patients during the stance phase of gait . It was hypothesized that these changes in knee kinematics were directly linked to the increased activation of the gastrocnemi during gait. Although low subject numbers limited the generalizability of the results these conclusions will serve to guide future research in this area and ultimately help improve function and quality of life in this patient population.