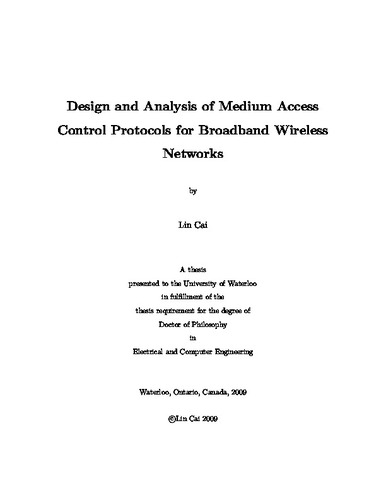 The next-generation wireless networks are expected to integrate diverse network architectures and various wireless access technologies to provide a robust solution for ubiquitous broadband wireless access, such as wireless local area networks (WLANs), Ultra-Wideband (UWB), and millimeter-wave (mmWave) based wireless personal area networks (WPANs), etc. To enhance the spectral efficiency and link reliability, smart antenna systems have been proposed as a promising candidate for future broadband access networks. To effectively exploit the increased capabilities of the emerging wireless networks, the different network characteristics and the underlying physical layer features need to be considered in the medium access control (MAC) design, which plays a critical role in providing efficient and fair resource sharing among multiple users. In this thesis, we comprehensively investigate the MAC design in both single- and multi-hop broadband wireless networks, with and without infrastructure support. We first develop mathematical models to identify the performance bottlenecks and constraints in the design and operation of existing MAC. We then use a cross-layer approach to mitigate the identified bottleneck problems. Finally, by evaluating the performance of the proposed protocols with analytical models and extensive simulations, we determine the optimal protocol parameters to maximize the network performance. In specific, a generic analytical framework is developed for capacity study of an IEEE 802.11 WLAN in support of non-persistent asymmetric traffic flows. The analysis can be applied for effective admission control to guarantee the quality of service (QoS) performance of multimedia applications. As the access point (AP) becomes the bottleneck in an infrastructure based WLAN, we explore the multiple-input multiple-output (MIMO) capability in the future IEEE 802.11n WLANs and propose a MIMO-aware multi-user (MU) MAC. By exploiting the multi-user degree of freedom in a MIMO system to allow the AP to communicate with multiple users in the downlink simultaneously, the proposed MU MAC can minimize the AP-bottleneck effect and significantly improve the network capacity. Other enhanced MAC mechanisms, e.g., frame aggregation and bidirectional transmissions, are also studied. Furthermore, different from a narrowband system where simultaneous transmissions by nearby neighbors collide with each other, wideband system can support multiple concurrent transmissions if the multi-user interference can be properly managed. Taking advantage of the salient features of UWB and mmWave communications, we propose an exclusive region (ER) based MAC protocol to exploit the spatial multiplexing gain of centralized UWB and mmWave based wireless networks. Moreover, instead of studying the asymptotic capacity bounds of arbitrary networks which may be too loose to be useful in realistic networks, we derive the expected capacity or transport capacity of UWB and mmWave based networks with random topology. The analysis reveals the main factors affecting the network (transport) capacity, and how to determine the best protocol parameters to maximize the network capacity. In addition, due to limited transmission range, multi-hop relay is necessary to extend the communication coverage of UWB networks. A simple, scalable, and distributed UWB MAC protocol is crucial for efficiently utilizing the large bandwidth of UWB channels and enabling numerous new applications cost-effectively. To address this issue, we further design a distributed asynchronous ER based MAC for multi-hop UWB networks and derive the optimal ER size towards the maximum network throughput. The proposed MAC can significantly improve both network throughput and fairness performance, while the throughput and fairness are usually treated as a tradeoff in other MAC protocols.