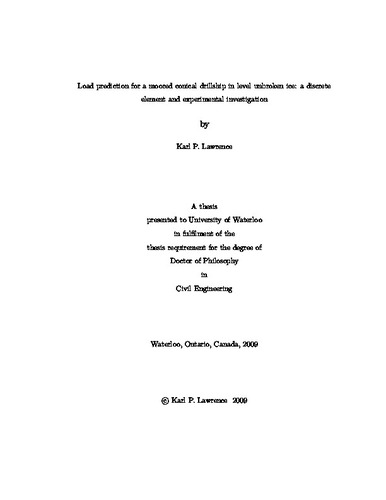 This thesis is composed of theoretical, experimental, and numerical studies. In Part I, it discusses fundamental challenges of the discrete element method, provides a set of algorithms for addressing them, and presents performance gains of an improved algorithm on a target computer platform. A new contact detection and force resolution algorithm based upon (i) the fast common-plane (FCP) algorithm, (ii) using axisaligned bounding boxes (AABBs) to perform a proximity search, (iii) estimating the time of collision, and (iv) accurate resolution of contact points is presented. Benchmark simulations indicate an order of magnitude increase in performance is achievable for a relatively small number of elements. A new parallel discrete element algorithm is presented which combines the domain decomposition, object-oriented, and perfectly parallel strategies of parallelism to eliminate the drawbacks of parallel discrete element algorithms put forth by past studies. A significant speed-up is observed in comparison to past studies in trials conducted on a NUMA-based SMP computer. In Part II, various applications of the discrete element method are reviewed, with an emphasis on ice-structure interaction. The conical design of the Kulluk drillship is of particular interest due to its success in operating in the Beaufort Sea from 1975- 1993 and its subsequent purchase and recommission by Shell in 2006. Three previous experimental studies and a unique set of full-scale data measurements form the basis for comparison of a concurrent experimental and numerical investigation. The results of a model scale experiment at the NRC-IOT are analyzed and presented, followed by results of the numerical simulations. A 1:40 scale replica of the Kulluk platform in level ice produces results which are consistent with past experiments and confirm expected trends as well as different regimes of results dependent on the ductile/brittle behavior of ice. The numerical setup models the full-scale platform in three dimensions with a 24-sided rigid conical structure, ice as an elastic brittle material with plate-bending elements, and platform mooring through the implementation of a spread mooring algorithm. Numerical results are in agreement with past results for ice thickness of less than 1.2m, confirming that the initial design goal of the Kulluk was achieved while still overestimating the loads in comparison to the full-scale data set. Two explanations are presented for the non-conformity of the experimental and numerical predictions to the full-scale data results.