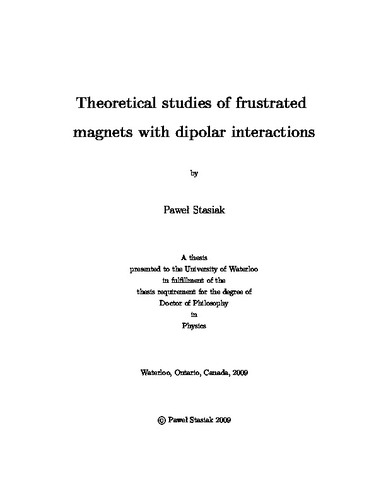 Several magnetic materials, in the first approximation, can be described by idealised theoretical models, such as classical Ising or Heisenberg spin systems, and, to some extent, such models are able to qualitatively expose many experimentally observed phenomena. But often, to account for complex behavior of magnetic matter, such models have to be refined by including more terms in Hamiltonian. The compound LiHo_xY_{1-x}F_4, by increasing concentration of nonmagnetic yttrium can be tuned from a diluted ferromagnet to a spin glass. LiHoF_4 is a good realisation of the transverse field Ising model, the simplest model exhibiting a quantum phase transition. In the pure case the magnetic behaviour of this material is well described by mean-field theory. It was believed that when diluted, LiHo_xY_{1-x}F_4 would also manifest itself as a diluted transverse field Ising model which continue to be well described by mean-field theory, and, at sufficient dilution, at zero temperature, exhibit a quantum spin-glass transition. The experimental data did not support such a scenario, and it was pointed out that, to explain physics of LiHo_xY_{1-x}F_4 in transverse magnetic field, the effect of a transverse-field-generated longitudinal random field has to be considered. We explore this idea further in local mean-field studies in which all three parameters: temperature, transverse field and concentration can be consistently surveyed, and where the transverse-field-generated longitudinal random field is explicitly present in the effective spin-1/2 Hamiltonian. We suggest other materials that are possible candidates for studying quantum criticality in the transverse field Ising model, and in the diluted case, for studying the effects of transverse and longitudinal random fields. The compounds we consider are RE(OH)_3, where RE are the rare earth ions Tb^{3+}, Dy^{3+} and Ho^{3+}. Using mean-field theory, we estimate the values of the transverse magnetic field that, at zero temperature, destroy ferromagnetic order to be B_x^c=4.35 T, B_x^c=5.03 T and B_x^c=54.81 T for Ho(OH)_3, Dy(OH)_3 and Tb(OH)_3, respectively. We confirm that Ho(OH)_3 and Tb(OH)_3, similarly to LiHoF_4, can be described by an effective spin-1/2 Hamiltonian. In the case of Dy(OH)_3 there is a possibility of a first order phase transition at transverse field close to B_x^c, and Dy(OH)_3 cannot be described by a spin-1/2 effective Hamiltonian. While diluted dipolar Ising spin glass has been studied experimentally in LiHo_xY_{1-x}F_4 and in numerical simulations, there are no studies of the Heisenberg case. Example materials that are likely candidates to be realisations of the diluted dipolar Heisenberg spin glass are (Gd_xY_{1-x})_2Ti_2O_7, (Gd_xY_{1-x})_2Sn_2O_7 and (Gd_xY_{1-x})_3Ga_5O_{12}. To stimulate interest in experimental studies of these systems we present results of Monte of Carlo simulations of the diluted dipolar Heisenberg spin glass. By performing finite-size scaling analysis of the spin-glass correlation length and the spin-glass susceptibility, we provide a compelling evidence of a thermodynamical spin-glass transition in the model. Frustrated pyrochlore magnets, depending on the character of single ion anisotropy and interplay of different types of interaction over a broad range of energy scales, exhibit a large spectrum of exotic phases and novel phenomena. The pyrochlore antiferromagnet Er_2Ti_2O_7 is characterised by a strong planar anisotropy. Experimental studies reveal that Er_2Ti_2O_7 undergoes a continuous phase transition to a long-range ordered phase with a spin configuration that, in this thesis, is referred to as the Champion-Holdsworth state. Such results are not in agreement with the theoretical prediction that the ground state of the pyrochlore easy-plane antiferromagnet with dipolar interactions complementing the nearest neighbour exchange interactions, is not the Champion-Holdsworth state but the so-called Palmer-Chalker state. On the other hand, Monte Carlo simulations of the easy-plane pyrochlore antiferromagnet indicate a thermal order-by-disorder selection of the Champion-Holdsworth state. To answer the question of whether order-by-disorder selection can be the mechanism at play in Er_2Ti_2O_7, we performed Monte Carlo simulations of the easy-plane pyrochlore antiferromagnet with weak dipolar interactions. We estimate the range strengths of the dipolar interaction such that order-by-disorder selection of the Champion-Holdsworth state is not suppressed. The estimated value of the allowed strength of the dipolar interactions indicates that the model studied is likely insufficient to explain the physics of Er_2Ti_2O_7 and other types of interactions or quantum effects should be considered.