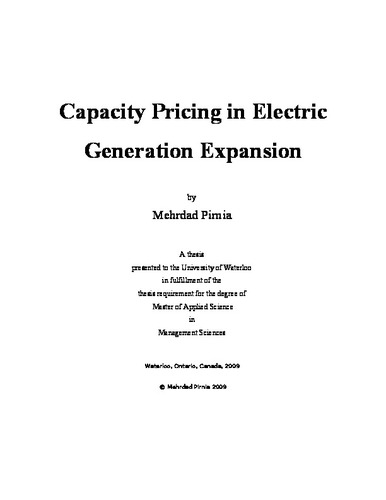 The focus of this thesis is to explore a new mechanism to give added incentive to invest in new capacities in deregulated electricity markets. There is a lot of concern in energy markets, regarding lack of sufficient private sector investment in new capacities to generate electricity. Although some markets are using mechanisms to reward these investments directly, e.g., by governmental subsidies for renewable sources such as wind or solar, there is not much theory to guide the process of setting the reward levels. The proposed mechanism involves a long term planning model, maximizing the social welfare measured as consumers’ plus producers’ surplus, by choosing new generation capacities which, along with still existing capacities, can meet demand. Much previous research in electricity capacity planning has also solved optimization models, usually with continuous variables only, in linear or non-linear programs. However, these approaches can be misleading when capacity additions must either be zero or a large size, e.g., the building of a nuclear reactor or a large wind farm. Therefore, this research includes binary variables for the building of large new facilities in the optimization problem, i.e. the model becomes a mixed integer linear or nonlinear program. It is well known that, when binary variables are included in such a model, the resulting commodity prices may give insufficient incentive for private investment in the optimal new capacities. The new mechanism is intended to overcome this difficulty with a capacity price in addition to the commodity price: an auxiliary mathematical program calculates the minimum capacity price that is necessary to ensure that all firms investing in new capacities are satisfied with their profit levels. In order to test the applicability of this approach, the result of the suggested model is compared with the Ontario Integrated Power System Plan (IPSP), which recommends new generation capacities, based on historical data and costs of different sources of electricity generation for the next 20 years given a fixed forecast of demand.