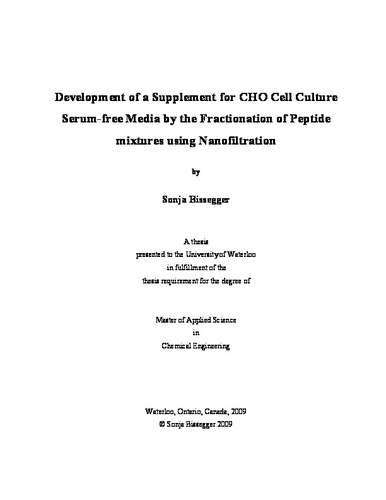 The objective of this work was the investigation of nanofiltration as a potential avenue to fractionate protein hydrolysates and produce protein hydrolysate fractions with stimulating bioactivity for the development of a supplement for a serum-free media. Mammalian cell culture is widely used for the production of therapeutic proteins such as antibodies, interleukins, and vaccines because of the ability of mammalian cells to glycosylate proteins. A complex media with the addition of serum is often required to meet the requirements of the cells. Although serum is a supplement that provides different proteins such as growth factors and hormones, serum has several disadvantages such as high cost, difficulty of downstream processing due to its high protein content and the possibility of microbiological contamination. Protein hydrolysates from plant, animal, or yeast cells contain a complex mixture of peptides and amino acids and have been shown to enhance growth of certain mammalian cell lines cultured in serum-free media. To fractionate peptide mixtures, nanofiltration was investigated in this study. Nanofiltration is a pressure driven membrane separation process based on size and charge. The investigation of pH and NaCl on the filtration performance for two different nanofiltration membranes (HL membrane and G-10 membrane) was achieved using a 24 factorial design. The total peptide concentration, the antioxidant activity, and organic and inorganic content were analyzed in the permeate and retentate fraction. The fractions were also tested for their enhanced growth ability and the specific -interferon productivity with CHO cells. Furthermore the retentate and permeate fractions were analyzed by reversed phase-HPLC to characterize the peptide and free amino acid distribution profile. Through the factorial design, the membrane type was shown to have a significant effect on the filtration performance for both yeast extract and Primatone. A significant difference, but similar for both feed sources, was observed for the total peptide transmission with around 10% for the HL membrane and around 30% for the G-10 membrane. The average permeate flux was significantly lower for the G-10 membrane although the G-10 membrane is a loose nanofiltration membrane with a reported 2500 Da MWCO compared to the HL membrane with a reported 300-500 Da MWCO. The total peptide transmission, organic and inorganic content of the fractions for the two feed sources and membrane type were affected differently according to pH and NaCl addition. These results indicate that the two feed sources are of different composition and that nanofiltration is a possible method to fractionate peptides. The bioactivity of the nanofiltration fractions was tested as a nutrient additive to a serum-free media in CHO cells. It was shown that the productivity is not always related to the cell density, as the highest overall specific interferon productivity was achieved for low cell density similar to the hydrolysate free negative control. Furthermore, the retentate fraction of yeast extract separated with the G-10 membrane at a pH of 8 resulted in the highest cell density. According to these results, nanofiltration is a promising method for the enrichment of protein hydrolysates as a supplement for serum in cell culture.