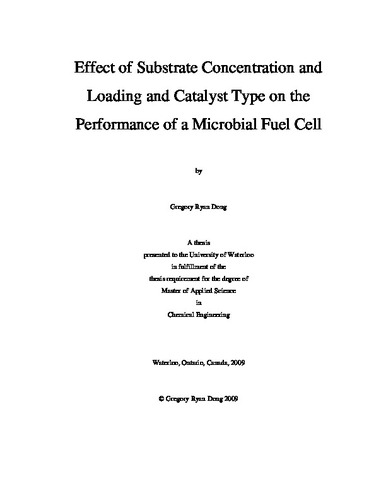 The microbial fuel cell (MFC) is an innovative renewable energy technology that also serves to treat wastewater through the bacteria-driven oxidation of organic substrates. The liquid anolyte contains the organic substrate to be oxidized, while the catholyte contains the substance to be reduced. In a dual-chamber MFC, the catholyte typically contains dissolved oxygen or another easily reducible compound (e.g., ferricyanide) in an aqueous solution, while in a single-chamber MFC, gaseous airborne oxygen reacts directly at the cathode. A single-chamber air-cathode microbial fuel cell was operated using an acetate substrate and a 0.2 mg/cm2 platinum catalyst cathode in the initial stages of the project. The platinum catalyst was airbrushed onto a carbon paper cathode and hot-pressed onto a Nafion 117 membrane. After the platinum runs were completed, the MFC was disassembled, cleaned and reassembled with a new non-precious nitrogen-doped carbon composite catalyst replacing the platinum. Two MFCs were operated at different loading levels (1.0 mg/cm2 and 2.0 mg/cm2) of the new catalyst. The cell was configured to operate in a fed-batch and upflow modes. Preliminary experiments were conducted using two non-precious catalysts synthesized with different nitrogen precursors, polyaniline and ethylenediamine (EDA). These experiments showed the ethylenediamine-based-catalyst exhibited higher catalytic activity for oxygen reduction (ORR) with a half-wave potential of 0.57 V versus 0.43 V for the polyaniline catalyst. These values were lower than the expected half-wave potential of 0.65 – 0.70 V. Consequently, the catalyst based on EDA was used in all subsequent experiments. SEM images revealed that this catalyst has a fluffy, bulbous, highly porous structure, while EDAX and XRD both detected the presence of residual iron and cobalt from the preparation procedure. Nitrogen (3.57 wt %) and oxygen (4.87 wt %) were also detected from the EDAX analysis. Operation with a hydraulic residence time (HRT) of 24 hours and feed COD concentration of 6.44 g COD/L-day was found to produce the highest power density of 141.7 ± 2.4 mW/m2 from the experiments conducted on the platinum catalyst. A subsequent run at a 12 hour HRT and 3.22 g COD/L-day feed produced only 104.4 ± 5.2 mW/m2. When the cell operation was reverted to the original high HRT and high feed COD concentration, the original current was not recovered and in fact remained virtually unchanged from the level attained at the lower HRT and COD feed level (105.7 ± 2.7 mW/m2). It was suspected that the decreased acetate concentration in the second phase, and the biomass accumulation in the replicate third phase were the cause of the decreased currents. Overall, the COD removal in each phase was high, between 87 – 95% although only a maximum of 4.24% was due to electricity generation. A significant portion of the COD removal during operation at high HRT and feed concentration was due to methane generation (30-50%), while the effect of oxygen leakage from the cathode into the anode compartment was estimated to account for a flux of up to 3.08 g COD/L-day, leading to significant biomass accumulation within the cell. Upon replacement of the platinum catalyst with the non-precious catalyst at the cathode, the current and power densities generated in the 1.0 mg/cm2 and 2.0 mg/cm2 cells rose by 50.5% and 205%, respectively, to 213.2 ± 13.9 mW/m2 and 431.8 ± 23.6 mW/m2. Importantly, the current generated in these cells was found to be exactly proportional to the catalyst loading level. The COD removal in these runs amounted to 79.6% and 92.2% of acetate, comparable to that achieved with the platinum catalyst. The coulombic efficiency increased as a result of the improved current densities to 6.71% and 12.18%, respectively. The improved performance with the non-precious catalyst demonstrates that it is a potentially attractive replacement for the conventional platinum as the catalyst for energy production. The proportionality between the generated current density and the catalyst loading also suggests that operation at higher catalyst loading levels will lead to further improvement in performance.

Gregory Dong (2009). Effect of Substrate Concentration and Loading and Catalyst Type on the Performance of a Microbial Fuel Cell. UWSpace. http://hdl.handle.net/10012/4867