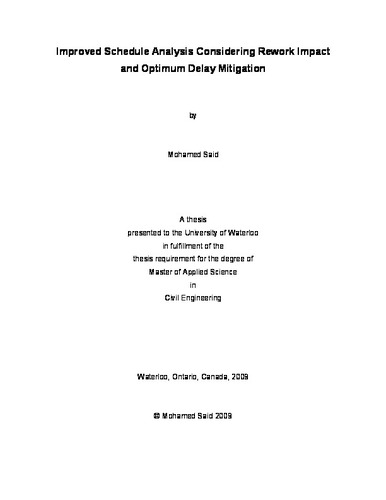 Rework has been a primary cause of cost and schedule overruns in the construction of heavy industrial projects such as those related to oil and gas. It has been reported that the direct cost of rework is about 5% of total construction costs. Several research studies have analyzed the causes and effects of rework in construction projects, but almost no research exists to support decisions with respect of an effective strategy for mitigating the effects of rework on the cost and schedule of the project. This research introduces a new schedule analysis mechanism that considers the impact of rework on project delays and then optimises corrective actions for mitigating those delays. The proposed mechanism considers rework from three perspectives: (1) a schedule representation of the magnitude of rework as a negative percentage completed with respect to the activities affected, as documented on a specific schedule date, (2) a day-by-day delay analysis for quantifying and apportioning project delays among the parties responsible, and (3) an optimization mechanism for determining the best mitigation strategy for recovering rework at a minimum additional cost. The proposed mechanism can represent and mitigate rework caused by both the Owner and the Contractor. The proposed schedule analysis mechanism has been applied to a case study in order to demonstrate its usefulness and applicability. The resulting mechanism offers a quantitative approach to the consideration of rework in delay analysis and the optimization of corrective action, which are important aspects of effective project control.