Equivalence of Queries with Nested Aggregation 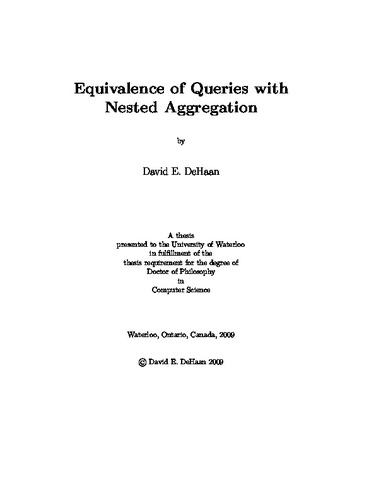 Query equivalence is a fundamental problem within database theory. The correctness of all forms of logical query rewriting—join minimization, view flattening, rewriting over materialized views, various semantic optimizations that exploit schema dependencies, federated query processing and other forms of data integration—requires proving that the final executed query is equivalent to the original user query. Hence, advances in the theory of query equivalence enable advances in query processing and optimization. In this thesis we address the problem of deciding query equivalence between conjunctive SQL queries containing aggregation operators that may be nested. Our focus is on understanding the interaction between nested aggregation operators and the other parts of the query body, and so we model aggregation functions simply as abstract collection constructors. Hence, the precise language that we study is a conjunctive algebraic language that constructs complex objects from databases of flat relations. Using an encoding of complex objects as flat relations, we reduce the query equivalence problem for this algebraic language to deciding equivalence between relational encodings output by traditional conjunctive queries (not containing aggregation). This encoding-equivalence cleanly unifies and generalizes previous results for deciding equivalence of conjunctive queries evaluated under various processing semantics. As part of our study of aggregation operators that can construct empty sub-collections—so-called “scalar” aggregation—we consider query equivalence for conjunctive queries extended with a left outer join operator, a very practical class of queries for which the general equivalence problem has never before been analyzed. Although we do not completely solve the equivalence problem for queries with outer joins or with scalar aggregation, we do propose useful sufficient conditions that generalize previously known results for restricted classes of queries. Overall, this thesis offers new insight into the fundamental principles governing the behaviour of nested aggregation.