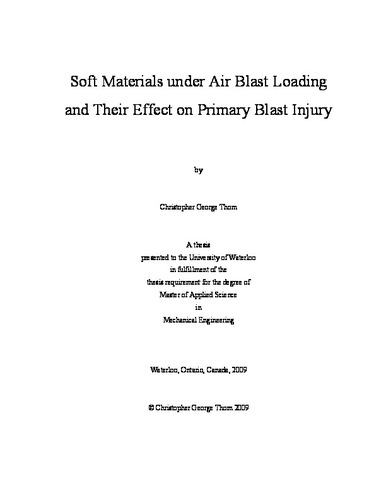 Injury from blast is significant in both military and civilian environments. Although injuries from blast are well-documented, the mechanisms of injury are not well understood. Developing better protection requires knowledge of injury mechanisms and material response to blast loading. The importance of understanding how soft materials such as foams and fabrics behave under blast loading is further apparent when one realizes the capacity for some of these materials, frequently used in protective ensembles, to increase the potential for injury under some conditions. The ability for material configurations to amplify blast pressure and injury has been shown experimentally by other researches, and numerically in this study. Initially, 1-D finite element and mathematical models were developed to investigate a variety of soft materials commonly utilized in ballistic and blast protection. Foams, which have excellent characteristics in terms of energy absorption and density, can be used in conjunction with other materials to drastically reduce the amplitude of the transmitted pressure wave and corresponding injury. Additionally, a more fundamental examination of single layers of fabric was undertaken to investigate to the effects of parameters such as fabric porosity and density. Shock tube models were developed and validated against experimental results from the literature. After the models were validated, individual fabric properties were varied independently to isolate the influence of parameters in ways not possible experimentally. Fabric permeability was found to have the greatest influence on pressure amplification. Kevlar, a ballistic fabric, was modelled due to its frequent use for fragmentation protection (either stand-alone or in conjunction with a hard ballistic plate). The developed fabric and foam material models were then utilized in conjunction with a detailed torso model for the estimation of lung injury resulting from air blast. It was found that the torso model predicted both amplification and attenuation of injury, and all materials investigated as a part of the study had the capacity for both blast amplification and attenuation. The benefit of the models developed is that they allow for the evaluation of specific protection concepts.