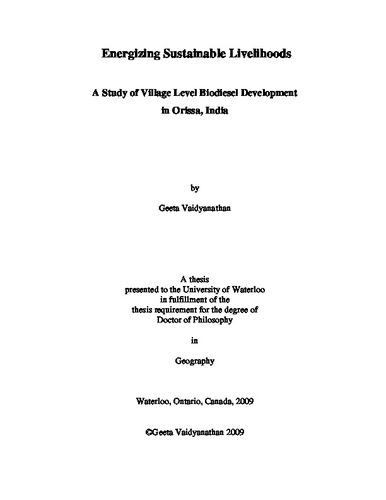 The present worldwide scenario is one of land-based livelihoods that are increasingly vulnerable to the impacts of climate change. While being committed to environmental goals, India’s National Action Plan on Climate Change released in 2008, reaffirms that maintaining a high growth rate is essential to raising the standard of living of the people. Curbing emissions while maintaining high growth rates and achieving the Millennium Development Goals without increase in fossil fuel consumption, both appear to be paradoxes. Community-based micro energy initiatives have the potential to support productive development without fossil fuel consumption. This study examines small scale, village level biodiesel production for local use, based on unutilized and under-utilized, existing oil seeds in remote rural locations in Orissa, India. The village level biodiesel model is a response to large agro-industrial models that promote plantation of energy crops like jatropha, and to centralized production of biofuels as an alternative to petrodiesel. Village level biodiesel adds value to the large quantity of locally unutilized forest seeds and underutilized short duration oilseed crops like niger that are exported as birdfeed, to fuel livelihoods and boost the local economy. The development of a village level biodiesel model in a participatory manner within an agroecosystem boundary, and its ability to catalyze livelihoods that are sustainable, have been analyzed. Participant observation techniques have been used to develop narrative case studies for three village communities. Methodology for the study is based on Participatory Action Research approaches (Kemmis et al., 2000), where the research process has contributed to community action. The Sustainable Livelihood approach forms an important foundation of this research. A conceptual framework adapted from the original Sustainable Livelihood Framework (Scoones, 1998), to include Complex Systems Thinking (Holling, et al., 1995, Kay, et al., 1999) was used to analyze case studies in two communities of Orissa, India. Informed by results in the first two case communities, the same framework was used to develop a livelihood strategy based on Village Level Biodiesel (VLB), in a third cluster of villages also in Orissa. Three additional inclusions are proposed as a result of the research, to address some gaps in the original framework. These are the concepts of (1) Entitlements (Leach, et al., 1997) to understand power structures, (2) Adaptation Continuum (McGray 2007) to include issues of climate impacts and (3) Rural Livelihood System (Hogger, 2004) as a complex whole relating the inner reality of the farmer to the outer reality of a swiftly globalizing world. Resilience of livelihoods was identified as a key outcome parameter. Three main considerations for assessing sustainability and resilience of livelihoods, as defined by this research are (1) potential for livelihood diversity and intensity, (2) connectedness of the institutions involved in the decision making process, and (3) adaptation – that is resilience of livelihoods in terms of their capacity to resist drivers of vulnerability and confront impacts of climate change. The VLB in Orissa approaches livelihood diversity and intensity through a three-pronged approach consisting of biodiesel fuelled livelihoods, sustainable agriculture and local value addition. Careful attention is given to the specifics of the context in designing the VLB, thus enhancing the adaptive capacity of the technology. In the context of India, with the devolution of power to the local level, the Gram Sabha, or the village governing council, has political powers and the ability to negotiate with the State because of the authority vested in it by the 73rd amendment to the Constitution of India, and can additionally regulate the market at the local level. Leveraging the powers of this entity may provide the VLB with the needed impetus to replicate and move beyond pilot implementations. Obstacles in the implementation and strategies to overcome these have been identified. The challenge to future research and action is to span regional, national and global levels to influence policy makers to take cognizance of and promote the VLB as a viable development alternative to agro-industrial models designed to generate transport fuel.