Theory, Design and Development of Resonance Based Biosensors in Terahertz and Millimeter-wave 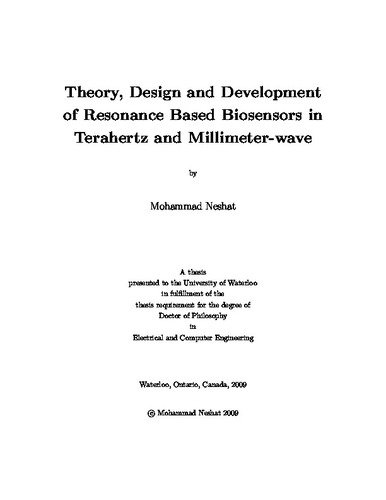 Recent advances in molecular biology and nanotechnology have enabled scientists to study biological systems at molecular and atomic scales. This level of sophistication demands for new technologies to emerge for providing the necessary sensing tools and equipment. Recent studies have shown that terahertz technology can provide revolutionary sensing techniques for organic and non-organic materials with unprecedented accuracy and sensitivity. This is due to the fact that most of the macromolecules have vibrational and/or rotational resonance signatures in terahertz range. To further increase the sensitivity, terahertz radiation is generated and interacted with the bio-sample on a miniaturized test site or the so-called biochip. From the view point of generation and manipulation of terahertz radiation, the biochip is designed based on the same rules as in high frequency electronic chips or integrated circuits (IC). By increasing the frequency toward terahertz range, the conventional IC design methodologies and analysis tools fail to perform accurately. Therefore, development of new design methodologies and analysis tools is of paramount importance for future terahertz integrated circuits (TIC) in general and terahertz biochips in particular. In this thesis, several advancements are made in design methodology, analysis tool and architecture of terahertz and millimeter-wave integrated circuits when used as a biochip. A global and geometry independent approach for design and analysis of the travelling-wave terahertz photomixer sources, as the core component in a TIC, is discussed in details. Three solvers based on photonic, semiconductor and electromagnetic theories are developed and combined as a unified analysis tool. Using the developed terahertz photomixer source, a resonance-based biochip structure is proposed, and its operation principle, based on resonance perturbation method, is explained. A planar metallic resonator acting as a sample holder and transducer is designed, and its performance in terms of sensitivity and selectivity is studied through simulations. The concept of surface impedance for electromagnetic modeling of DNA self-assembled monolayer on a metal surface is proposed, and its effectiveness is discussed based on the available data in the literature. To overcome the loss challenge, Whispering Gallery Mode (WGM) dielectric resonators with high Q factor are studied as an alternative for metallic resonator. The metallic loss becomes very high at terahertz frequencies, and as a result of that planar metallic resonators do not exhibit high Q factor. Reduced Q factor results in a low sensitivity for any sensor using such resonators. Theoretical models for axially and radially layered dielectric resonators acting on WGM are presented, and the analytical results are compared with the measured data. Excitation of WGM through dielectric waveguide is proposed, and the critical coupling condition is explained through analytical formulation. The possibility of selecting one resonance among many for sensing application is also studied both theoretically and experimentally. A high sensitivity sensor based on WGM resonance in mm-wave and terahertz is proposed, and its sensitivity is studied in details. The performance of the proposed sensor is tested for sensing drug tablets and also liquid droplets through various measurements in mm-wave range. The comprehensive sensitivity analysis shows the ability of the proposed sensor to detect small changes in the order of 10−4 in the sample dielectric constant. The results of various experiments carried out on drug tablets are reported to demonstrate the potential multifunctional capabilities of the sensor in moisture sensing, counterfeit drug detection, and contamination screening. The measurement and simulation results obtained in mm-wave hold promise for WGM to be used for sensing biological solutions in terahertz range with very high sensitivity.

Mohammad Neshat (2009). Theory, Design and Development of Resonance Based Biosensors in Terahertz and Millimeter-wave. UWSpace. http://hdl.handle.net/10012/4856