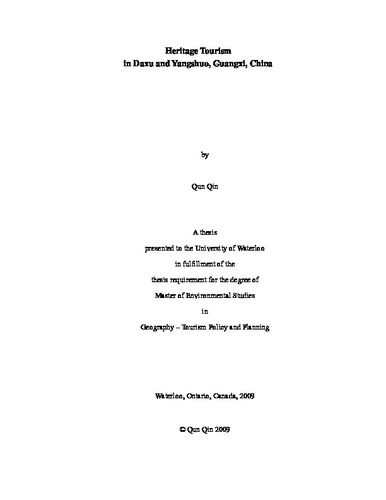 Heritage tourism is employed by many countries to facilitate economic development as well as to assist in the preservation of heritage. Different stakeholders have different and sometimes conflicting expectation in the process of converting heritage resources into marketable products. Heritage tourism is especially complicated because public and private, historical and sometimes ethnic resources are involved. Despite the fact that some literature is devoted to the impacts of the designation and management of heritage tourism on residents, little research has been done on how government roles and associated political perspectives can affect the way that heritage tourism develops. Detailed comparative studies that are undertaken from this perspective are rare. This research uses experiences of Daxu ancient town and Yangshuo town, in Guangxi Zhuang Autonomous Region, China, to compare the influence of governmental involvement on heritage tourism development. Key stakeholders’ perceptions (tourists, entrepreneurs, residents and governments) were examined in both towns through quantitative and qualitative research. A tourist survey was conducted to collect data on their experience on their trips. A resident survey was conducted to collect data on local residents’ perceptions of tourism impacts, and their judgments of the government’s performance in tourism administration and promotion. Entrepreneurs were interviewed to understand their motivations, situations and expectations for their businesses. Finally, government officials were interviewed to understand the policies, marketing, and official attitudes and involvement in tourism development. Economic advantages have been a driving force in heritage tourism development in both towns. Yangshuo is in a more mature stage of tourism development than Daxu which is still in the initial stage. Residents in both towns show high expectations for tourism development, but Yangshuo residents are surer about most of the impacts brought by tourism. Entrepreneurs are often local investors and are struggling in Daxu while, in Yangshuo, tourism entrepreneurs are often from elsewhere and include international investors. Yangshuo entrepreneurs are more entrepreneurial, highly responsive to the market and are contributing to the attractions of Yangshuo. Government attitudes toward tourism are very different between Daxu and Yangshuo. Yangshuo’s government accords great importance to tourism and actively supports its tourism development and, as such, tourism boomed in Yangshuo. Daxu’s government passively supports tourism. This study confirms that variations in government support can greatly influence the style and pace of tourism development.