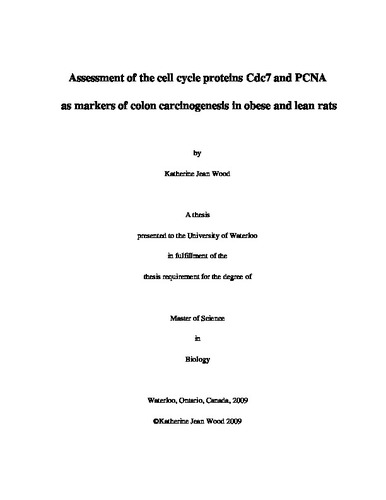 Obesity increases the risk of colon cancer as well as the expression of many cancer markers, ostensibly due to the interaction between insulin resistance and adipocyte production of hormones, mitogens and cytokines which collaborate to enhance proliferation signaling and impair the DNA damage response. Cdc7 and PCNA are both proteins involved in the DNA damage response as well as DNA replication. Both have also been shown to be upregulated in human tumours. To assess Cdc7 and PCNA roles during the DNA damage response in obese and lean animals, we administered azoxymethane (AOM), a colon-specific carcinogen, to obese and lean rats. Cdc7 and PCNA levels in colonic mucosal protein extracts from obese Zucker rats were compared with those from their lean counterparts. Significant differences were seen between lean and obese animals 3 hours post-AOM (lean Cdc7 levels > obese Cdc7 levels) and 24 hours post-AOM (lean PCNA levels > obese PCNA levels). This result suggests an impaired checkpoint response in obese animals relative to lean animals and supports a previously reported early role for Cdc7 in the checkpoint signaling cascade relative to a later role of PCNA in DNA damage repair. At the time tumours appeared (32 weeks post-AOM), colonic mucosal Cdc7 levels of obese rats exceeded that of their lean counterparts, suggesting that the obese metabolic environment causes upregulation of Cdc7 in obese rat epithelia. Cdc7 and PCNA levels were then compared between tumours and mucosa in obese and Sprague Dawley rats. Tumour Cdc7 levels were upregulated relative to mucosal levels in more samples than tumour PCNA levels, suggesting Cdc7 may be a more sensitive tumour marker. No significant differences in Cdc7 levels were seen between obese tumours and mucosa, likely due to elevation of obese mucosal Cdc7 levels. However, Sprague Dawley (non-obese) rats showed significantly higher Cdc7 and PCNA levels in tumours than mucosa, consistent with previous studies in human tissues. These results suggest that Cdc7 may be a more sensitive tumour marker than PCNA, but that its utility as a biomarker of colon cancer is dependent on the metabolic state (leanness) of the individual.

Katherine Wood (2009). Assessment of the cell cycle proteins Cdc7 and PCNA as markers of colon carcinogenesis in obese and lean rats. UWSpace. http://hdl.handle.net/10012/4853