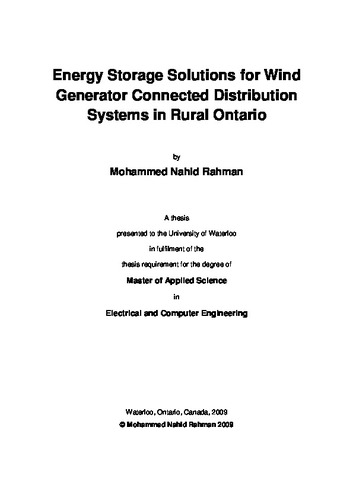 Environmental awareness and uncertainty about continued supply of fossil fuel has given rise to the renewable energy movement. Wind based power generation has been at the forefront of the motion to integrate distributed energy sources in the traditional power system. Due to various technical restrictions, wide scale penetration of wind generated power has been held back by most utilities. One such restriction is the variability of generation due to the technology’s dependence on Mother Nature. Energy storage devices can complement the wind generators by reducing this variability. These devices can store excess generation for supply during low generation periods. There are several promising technologies for both energy storage and power storage applications. Power storage devices provide short term fluctuation dampening capability while energy storage devices allow longer term storage. Pumped hydro, Vanadium Redox battery and Sodium-Sulphur battery are some of the viable energy storage technologies. This project provides a set of algorithms and guidelines to obtain the optimal configuration parameters of an energy storage device. To verify the efficiency of the algorithms, a model system has been obtained from a local utility. This system represents a typical radial distribution system in rural Ontario. The load demand, wind speed and energy prices for a period of one year have been obtained from utilities and Environment Canada. The main goal in determining the location of the storage device within a distribution system is to minimize the total cost of energy and the total energy loss during the period of analysis. Locating the storage device near the wind turbines or near the largest loads lead to the optimum results. Buses that are located near those elements can be considered as suitable locations for the storage device. The energy storage capacity and charge-discharge rate of the storage device are selected based on four criteria: maximize wind turbines’ load following capability, maximize capacity factors of the wind turbines, minimize system energy losses and minimize system energy costs. A weight based multi-objective optimization algorithm has been proposed to assign various priorities to these criteria and obtain a single solution. The larger the energy storage capacity of the storage device, the better the improvement in system performance. Lower charge-discharge ramp rates provide superior results. The parameters for storage device operating schedule, i.e. charge-discharge trigger levels, have been selected using similar criteria and weighted objective approach as for the capacity selection process. Higher charge trigger levels and moderate discharge trigger levels provide the optimum system performance. Once a set of parameters for the storage device has been selected, bus voltages over the period of study are analyzed. Voltage variations outside certain limits have been identified. Finally, a Monte Carlo based simulation approach is presented to obtain output parameter (system performance) variation ranges for pseudo random changes in input parameters.