Design and Evaluation of a Presentation Maestro: Controlling Electronic Presentations Through Gesture 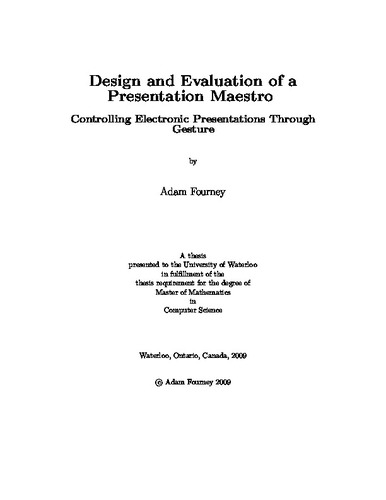 Gesture-based interaction has long been seen as a natural means of input for electronic presentation systems; however, gesture-based presentation systems have not been evaluated in real-world contexts, and the implications of this interaction modality are not known. This thesis describes the design and evaluation of Maestro, a gesture-based presentation system which was developed to explore these issues. This work is presented in two parts. The first part describes Maestro's design, which was informed by a small observational study of people giving talks; and Maestro's evaluation, which involved a two week field study where Maestro was used for lecturing to a class of approximately 100 students. The observational study revealed that presenters regularly gesture towards the content of their slides. As such, Maestro supports several gestures which operate directly on slide content (e.g., pointing to a bullet causes it to be highlighted). The field study confirmed that audience members value these content-centric gestures. Conversely, the use of gestures for navigating slides is perceived to be less efficient than the use of a remote. Additionally, gestural input was found to result in a number of unexpected side effects which may hamper the presenter's ability to fully engage the audience. The second part of the thesis presents a gesture recognizer based on discrete hidden Markov models (DHMMs). Here, the contributions lie in presenting a feature set and a factorization of the standard DHMM observation distribution, which allows modeling of a wide range of gestures (e.g., both one-handed and bimanual gestures), but which uses few modeling parameters. To establish the overall robustness and accuracy of the recognition system, five new users and one expert were asked to perform ten instances of each gesture. The system accurately recognized 85% of gestures for new users, increasing to 96% for the expert user. In both cases, false positives accounted for fewer than 4% of all detections. These error rates compare favourably to those of similar systems.