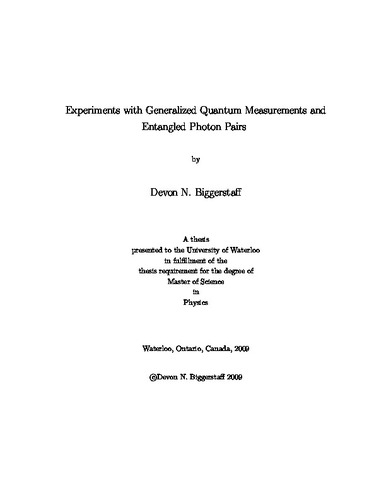 This thesis describes a linear-optical device for performing generalized quantum measurements on quantum bits (qubits) encoded in photon polarization, the implementation of said device, and its use in two diff erent but related experiments. The device works by coupling the polarization degree of freedom of a single photon to a `mode' or `path' degree of freedom, and performing a projective measurement in this enlarged state space in order to implement a tunable four-outcome positive operator-valued measure (POVM) on the initial quantum bit. In both experiments, this POVM is performed on one photon from a two-photon entangled state created through spontaneous parametric down-conversion. In the fi rst experiment, this entangled state is viewed as a two-qubit photonic cluster state, and the POVM as a means of increasing the computational power of a given resource state in the cluster-state model of quantum computing. This model traditionally achieves deterministic outputs to quantum computations via successive projective measurements, along with classical feedforward to choose measurement bases, on qubits in a highly entangled resource called a cluster state; we show that `virtual qubits' can be appended to a given cluster by replacing some projective measurements with POVMs. Our experimental demonstration fully realizes an arbitrary three-qubit cluster computation by implementing the POVM, as well as fast active feed-forward, on our two-qubit photonic cluster state. Over 206 diff erent computations, the average output delity is 0.9832 +/- 0.0002; furthermore the error contribution from our POVM device and feedforward is only of order 10^-3, less than some recent thresholds for fault-tolerant cluster computing. In the second experiment, the POVM device is used to implement a deterministic protocol for remote state preparation (RSP) of arbitrary photon polarization qubits. RSP is the act of preparing a quantum state at a remote location without actually transmitting the state itself. We are able to remotely prepare 178 diff erent pure and mixed qubit states with an average delity of 0.995. Furthermore, we study the the fidelity achievable by RSP protocols permitting only classical communication, without shared entanglement, and compare the resulting benchmarks for average fidelity against our experimental results. Our experimentally-achieved average fi delities surpass the classical thresholds whenever classical communication alone does not trivially allow for perfect RSP.