Factors that Influence Short-term Learning of Visual-Tactile Associations: An Investigation of Behavioural Performance and the Associated Electrophysiological Mechanisms 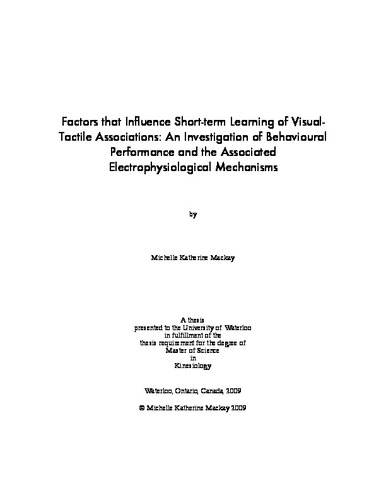 Neuroplasticity is a mechanism whereby the brain changes its configuration and function through experience. Short-term learning (i.e. minutes to hours) is associated with early phases of neuroplasticity whereby the cortical responses increase to common stimuli, and underlies long-term learning (i.e. days to weeks). Tactile sensation is an important sense, therefore if it became compromised it would be valuable to have an understanding of the neural mechanisms that underlie tactile short-term learning, and other means to promote learning, such as the introduction of a second modality. Having more knowledge in the area of somatosensory learning could then provide the means leading to long-term learning and potential recovery of function after brain injury such as stroke. The focus of this thesis was to research the role of visual information on short-term somatosensory learning, and to understand the electrophysiological mechanisms that are associated with this modulation of learning within a single testing session. The methodology consisted of learning Morse code tactile patterns corresponding to English letters, and was broken up into two experiments. The objective of the first experiment was to determine the functional benefit to performance of the temporal and spatial coupling of tactile and visual stimuli, and the second experiment was used to determine the electrophysiological mechanisms associated with the modulation of somatosensory processing by visual stimulation. Given that there is a quantifiable measurement of learning, we hypothesized that tactile-visual cross-modal coupling will increase the learning outcome and provide functional benefit. It has been shown (Eimer et al., 2001) that presenting a visual stimulus within the same spatial site as the corresponding tactile stimulus will enhance the measurable components, and better the behavioural performance (Ohara et al., 2006). The current results demonstrated that visual-tactile cross-modal association can have a positive effect on learning over a short period of time, and that presenting a visual stimulus prior to a tactile stimulus may be beneficial to performance during the early stages of learning. Also, the results from the second experiment demonstrated an elevated and prolonged tactile P100, and a noticeably absent N140 component when tactile information was presented before visual information. Further research, extending from this thesis, is needed to advance understanding of the performance and electrophysiological outcomes of visual-tactile cross-modal associations. The findings of this study give insight into the performance and electrophysiological effects involved with short-term somatosensory learning, specifically how the manipulation of a visual stimulus, both spatially and temporally, can affect tactile learning as indicated through behavioural performance, and affect the electrophysiological mechanisms involved with somatosensory processing.