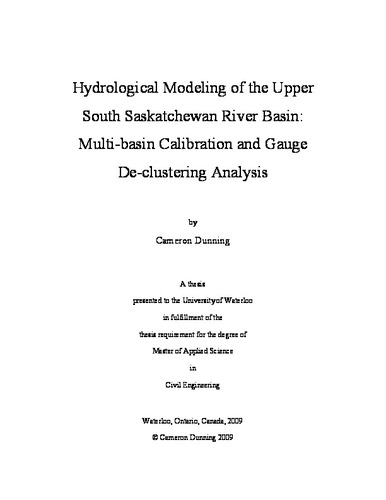 This thesis presents a method for calibrating regional scale hydrologic models using the upper South Saskatchewan River watershed as a case study. Regional scale hydrologic models can be very difficult to calibrate due to the spatial diversity of their land types. To deal with this diversity, both a manual calibration method and a multi-basin automated calibration method were applied to a WATFLOOD hydrologic model of the watershed. Manual calibration was used to determine the effect of each model parameter on modeling results. A parameter set that heavily influenced modeling results was selected. Each influential parameter was also assigned an initial value and a parameter range to be used during automated calibration. This manual calibration approach was found to be very effective for improving modeling results over the entire watershed. Automated calibration was performed using a weighted multi-basin objective function based on the average streamflow from six sub-basins. The initial parameter set and ranges found during manual calibration were subjected to the optimization search algorithm DDS to automatically calibrate the model. Sub-basin results not involved in the objective function were considered for validation purposes. Automatic calibration was deemed successful in providing watershed-wide modeling improvements. The calibrated model was then used as a basis for determining the effect of altering rain gauge density on model outputs for both a local (sub-basin) and global (watershed) scale. Four de-clustered precipitation data sets were used as input to the model and automated calibration was performed using the multi-basin objective function. It was found that more accurate results were obtained from models with higher rain gauge density. Adding a rain gauge did not necessarily improve modeled results over the entire watershed, but typically improved predictions in the sub-basin in which the gauge was located.