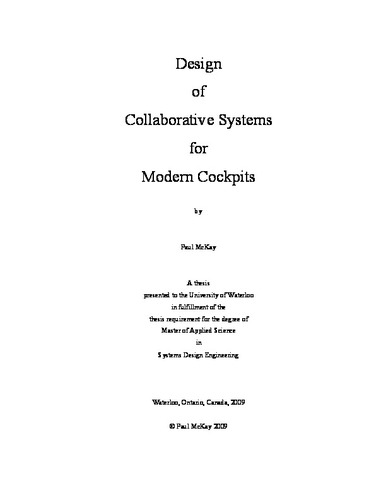 One of the most significant developments in cockpit technology over the past several years is the emergence of a new cockpit architecture that uses cursor control devices and keyboards for interaction with individual and shared displays. This architecture has allowed for the design of cockpit interfaces with many advantages compared to traditional designs. However, there are a number of challenges associated with these new cockpits that should be addressed so that pilots will be able to take full advantage of the performance improvements available from the new designs. This thesis describes three of the major challenges associated with the new architecture: supporting awareness, assisting interruption recovery, and mitigating interaction conflicts. It also describes the analysis process used to identify these challenges and proposes an interface augmentation with the potential to address them. The proposed design uses visualizations of the history of operator interactions with the interface to provide cues to the pilots about where each of them has been (and is currently) interacting. This interaction data includes both visual (sourced from a gaze tracking system) and input (from the keyboard or cursor control device) information, and was communicated on the interface using dynamic borders around the relevant areas of the interface. This augmentation aimed to address the three identified challenges by providing pilots with: improved awareness of each other’s actions, visual cues of where they were working prior to an interruption and what has changed since, and clear indications of where each is working to allow them to avoid conflicts. A two-stage evaluation process was used to determine the utility of the interface concept in a cockpit context by developing a non-interactive video prototype and showing it to pilots. The results of the evaluation indicated that the design has sufficient potential to warrant further study, as evaluation in higher fidelity environments would help provide further evidence of its potential utility for live cockpit operations. Therefore, future work should include the development and evaluation of a fully interactive prototype for live cockpit operations, as well as further examination of the design concept’s potential for use as a training tool.