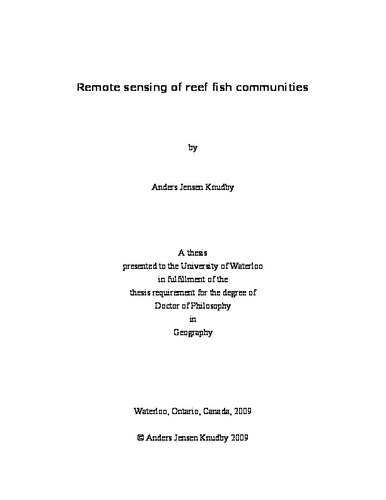 During the last three decades of coral reefs studies, the large areal coverage of data derived from satellite images has increasingly been used to complement the more detailed but spatially limited data produced by conventional fieldwork. Continuous improvement in sensor capabilities, along with the development of increasingly refined methods for image processing, has lead to ever more accurate maps of physical and biological variables of importance to reef ecology. During the same period, an abundance of field studies have documented statistical relationships between aspects of the reef habitat and its fish community. Despite numerous stochastic influences, such as spatially concentrated and temporally variable fish recruitment pulses or the selective and patchy mortality caused by fishing, several aspects of habitat have been shown to significantly influence the fish community. Fortunately the most important of these, water depth, the structural complexity of the reef, and the cover of live coral, are possible to estimate from currently available satellite imagery. The research presented in the following pages has combined the statistical relationships between the fish community and its habitat with the capability of satellite imagery to map that habitat, thereby answering the research question: How can remote sensing be used to map coral reef fish communities? In the process, a set of new techniques for predictive modeling of complex relationships have been compared, the influence of a range of habitat variables on the fish community quantified, the spatial scales at which the fish-habitat relationships are strongest have been explored, and new methods for deriving estimates of some aspects of the coral reef habitat from satellite imagery have been developed. The results presented in this thesis thus contribute to the further understanding of fish-habitat relationships, while providing a template for producing spatially explicit predictive models of fish community variables. This is not only of scientific interest, but also of substantial value to the conservation community that tries to protect the world’s remaining healthy coral reef ecosystems, and their fish communities, from an array of man-made influences.