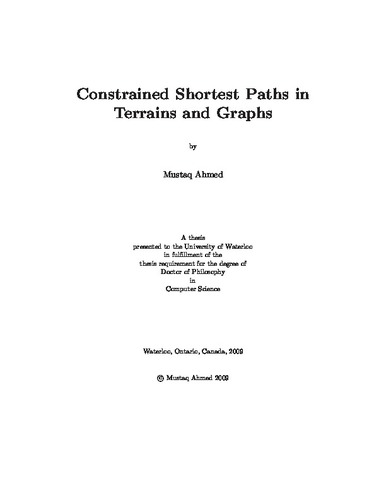 Finding a shortest path is one of the most well-studied optimization problems. In this thesis we focus on shortest paths in geometric and graph theoretic settings subject to different feasibility constraints that arise in practical applications of such paths. One of the most fundamental problems in computational geometry is finding shortest paths in terrains, which has many applications in robotics, computer graphics and Geographic Information Systems (GISs). There are many variants of the problem in which the feasibility of a path is determined by some geometric property of the terrain. One such variant is the shortest descending path (SDP) problem, where the feasible paths are those that always go downhill. We need to compute an SDP, for example, for laying a canal of minimum length from the source of water at the top of a mountain to fields for irrigation purpose, and for skiing down a mountain along a shortest route. The complexity of finding SDPs is open. We give a full characterization of the bend angles of an SDP, showing that they follow a generalized form of Snell's law of refraction of light. We also reduce the SDP problem to the problem of finding an SDP through a given sequence of faces, by adapting the sequence tree approach of Chen and Han for our problem. Our results have two implications. First, we isolate the difficult aspect of SDPs. The difficulty is not in deciding which face sequence to use, but in finding the SDP through a given face sequence. Secondly, our results help us identify some classes of terrains for which the SDP problem is solvable in polynomial time. We give algorithms for two such classes. The difficulty of finding an exact SDP motivates the study of approximation algorithms for the problem. We devise two approximation algorithms for SDPs in general terrains---these are the first two algorithms to handle the SDP problem in such terrains. The algorithms are robust and easy-to-implement. We also give two approximation algorithms for the case when a face sequence is given. The first one solves the problem by formulating it as a convex optimization problem. The second one uses binary search together with our characterization of the bend angles of an SDP to locate an approximate path. We introduce a generalization of the SDP problem, called the shortest gently descending path (SGDP) problem, where a path descends but not too steeply. The additional constraint to disallow a very steep descent makes the paths more realistic in practice. For example, a vehicle cannot follow a too steep descent---this is why a mountain road has hairpin bends. We give two easy-to-implement approximation algorithms for SGDPs, both using the Steiner point approach. Between a pair of points there can be many SGDPs with different number of bends. In practice an SGDP with fewer bends or smaller total turn-angle is preferred. We show using a reduction from 3-SAT that finding an SGDP with a limited number of bends or a limited total turn-angle is hard. The hardness result applies to a generalization of the SGDP problem called the shortest anisotropic path problem, which is a well-studied computational geometry problem with many practical applications (e.g., robot motion planning), yet of unknown complexity. Besides geometric shortest paths, we also study a variant of the shortest path problem in graphs: given a weighted graph G and vertices s and t, and given a set X of forbidden paths in G, find a shortest s-t path P such that no path in X is a subpath of P. Path P is allowed to repeat vertices and edges. We call each path in X an exception, and our desired path a shortest exception avoiding path. We formulate a new version of the problem where the algorithm has no a priori knowledge of X, and finds out about an exception x in X only when a path containing x fails. This situation arises in computing shortest paths in optical networks. We give an easy-to-implement algorithm that finds a shortest exception avoiding path in time polynomial in |G| and |X|. The algorithm handles a forbidden path using vertex replication, i.e., replicating vertices and judiciously deleting edges so as to remove the forbidden path but keep all of its subpaths. The main challenge is that vertex replication can result in an exponential number of copies of any forbidden path that overlaps the current one. The algorithm couples vertex replication with the "growth" of a shortest path tree in such a way that the extra copies of forbidden paths produced during vertex replication are immaterial.