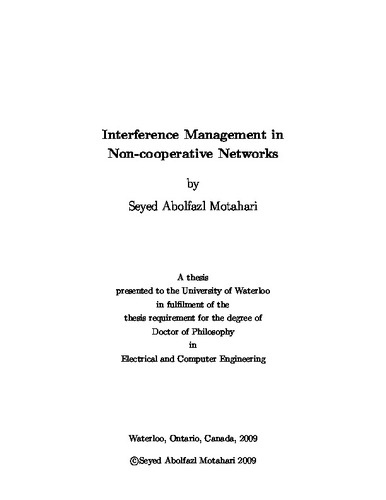 Spectrum sharing is known as a key solution to accommodate the increasing number of users and the growing demand for throughput in wireless networks. While spectrum sharing improves the data rate in sparse networks, it suffers from interference of concurrent links in dense networks. In fact, interference is the primary barrier to enhance the overall throughput of the network, especially in the medium and high signal-to-noise ratios (SNR’s). Managing interference to overcome this barrier has emerged as a crucial step in developing efficient wireless networks. This thesis deals with optimum and sub-optimum interference management-cancelation in non-cooperative networks. Several techniques for interference management including novel strategies such as interference alignment and structural coding are investigated. These methods are applied to obtain optimum and sub-optimum coding strategies in such networks. It is shown that a single strategy is not able to achieve the maximum throughput in all possible scenarios and in fact a careful design is required to fully exploit all available resources in each realization of the system. This thesis begins with a complete investigation of the capacity region of the two-user Gaussian interference channel. This channel models the basic interaction between two users sharing the same spectrum for data communication. New outer bounds outperforming known bounds are derived using Genie-aided techniques. It is proved that these outer bounds meet the known inner bounds in some special cases, revealing the sum capacity of this channel over a certain range of parameters which has not been known in the past. A novel coding scheme applicable in networks with single antenna nodes is proposed next. This scheme converts a single antenna system to an equivalent Multiple Input Multiple Output (MIMO) system with fractional dimensions. Interference can be aligned along these dimensions and higher multiplexing gains can be achieved. Tools from the field of Diophantine approximation in number theory are used to show that the proposed coding scheme in fact mimics the traditional schemes used in MIMO systems where each data stream is sent along a direction and alignment happens when several streams are received along the same direction. Two types of constellation are proposed for the encoding part, namely the single layer constellation and the multi-layer constellation. Using single layer constellations, the coding scheme is applied to the two-user $X$ channel. It is proved that the total Degrees-of-Freedom (DOF), i.e. $\frac{4}{3}$, of the channel is achievable almost surely. This is the first example in which it is shown that a time invariant single antenna system does not fall short of achieving this known upper bound on the DOF. Using multi-layer constellations, the coding scheme is applied to the symmetric three-user GIC. Achievable DOFs are derived for all channel gains. It is observed that the DOF is everywhere discontinuous (as a function of the channel gain). In particular, it is proved that for the irrational channel gains the achievable DOF meets the upper bound of $\frac{3}{2}$. For the rational gains, the achievable DOF has a gap to the known upper bounds. By allowing carry over from multiple layers, however, it is shown that higher DOFs can be achieved for the latter. The $K$-user single-antenna Gaussian Interference Channel (GIC) is considered, where the channel coefficients are NOT necessarily time-variant or frequency selective. It is proved that the total DOF of this channel is $\frac{K}{2}$ almost surely, i.e. each user enjoys half of its maximum DOF. Indeed, we prove that the static time-invariant interference channels are rich enough to allow simultaneous interference alignment at all receivers. To derive this result, we show that single-antenna interference channels can be treated as \emph{pseudo multiple-antenna systems} with infinitely-many antennas. Such machinery enables us to prove that the real or complex $M \times M$ MIMO GIC achieves its total DOF, i.e., $\frac{MK}{2}$, $M \geq 1$. The pseudo multiple-antenna systems are developed based on a recent result in the field of Diophantine approximation which states that the convergence part of the Khintchine-Groshev theorem holds for points on non-degenerate manifolds. As a byproduct of the scheme, the total DOFs of the $K\times M$ $X$ channel and the uplink of cellular systems are derived. Interference alignment requires perfect knowledge of channel state information at all nodes. This requirement is sometimes infeasible and users invoke random coding to communicate with their corresponding receivers. Alternative interference management needs to be implemented and this problem is addressed in the last part of the thesis. A coding scheme for a single user communicating in a shared medium is proposed. Moreover, polynomial time algorithms are proposed to obtain best achievable rates in the system. Successive rate allocation for a $K$-user interference channel is performed using polynomial time algorithms.