Two of the Mechanims Used by Bacteria to Modify the Environment: Quorum Sensing and ACC Deaminase 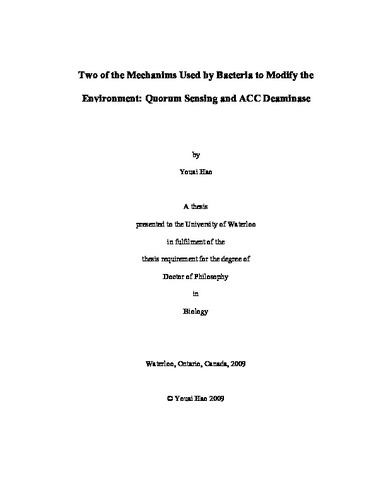 Quorum sensing (QS) cell-cell communication systems are utilized by bacteria to coordinate their behaviour according to cell density. Several different types of QS signal molecules have been identified, among which acyl-homoserine lactones (AHLs) produced by Proteobacteria have been studied to the greatest extent. QS has been shown to be involved in many aspects of bacterial life, including virulence, bioluminescence, symbiosis, antibiotic production, swarming and swimming motility, biofilm formation, conjugation and growth inhibition. Although QS has been studied extensively in cultured microorganisms, little is known about the QS systems of uncultured microorganisms and the roles of these systems in microbial communities. To extend our knowledge of QS systems and to better understand the signalling that takes place in the natural environment, in the first part of this thesis, isolation and characterization of new QS systems from metagenomic libraries constructed using DNA from activated sludge and soil were described. Using an Agrobacterium biosensor strain, three cosmids (QS6-1, QS10-1 and QS10-2) that encode the production of QS signals were identified and DNA sequence analysis revealed that all three clones encode a novel luxI family AHL synthase and a luxR family transcriptional regulator. Thin layer chromatography revealed that these LuxI homolog proteins are able to synthesize multiple AHL signals. Tandem mass spectrometry analysis revealed that LuxIQS6-1 directs the synthesis of at least three AHLs, 3-O-C14:1 HSL, 3-O-C16:1 HSL and 3-O-C14 HSL; LuxIQS10-1 directs the synthesis of at least 3-O-C12 HSL and 3-O-C14 HSL; while LuxIQS10-2 directs the synthesis of at least C8 HSL and C10 HSL. Two possible new AHLs, C14:3 HSL and (?)-hydroxymethyl-3-O-C14 HSL, were also found to be synthesized by LuxIQS6-1. Agrobacterium tumefaciens is a plant pathogen that causes crown gall disease. Its ability to transfer and integrate foreign DNA into plant genome also makes it a useful tool for plant genetic engineering. Ethylene, the gaseous plant hormone, has been reported to be important for both crown gall development and A. tumefaciens mediated transformation efficiency to plants. ACC deaminase, an enzyme that can break down ACC, the direct precursor of ethylene biosynthesis in plants, is a mechanism used by some plant growth promoting bacteria (PGPB) to promote plant growth by reducing stress ethylene levels. In the second part of this thesis, the effect of ACC deaminase on A. tumefaciens induced crown gall development and on A. tumefaciens mediated transformation efficiency was studied. By either introduction of an ACC deaminase encoding gene into the virulent strain A. tumefaciens C58 or co-inoculation of A. tumefaciens C58 with an ACC deaminase containing PGPB P. putida UW4, using different plant systems including tomato plants and castor bean plants, it was found that the presence of an ACC deaminase significantly inhibited crown gall development. It was also found that introduction of an acdS gene into the disarmed A. tumefaciens strain GV3101::pMP90 reduced the ethylene levels evolved by plants during infection and cocultivation process and increased the transformation efficiency of commercialized canola cultivars. The A. tumefaciens D3 strain was reported to contain an ACC deaminase encoding gene (acdS). In this study it was determined that this strain is an avirulent strain and shows plant growth promoting activity. When co-inoculated with A. tumefaciens C58 on castor bean stems, both the wild type and the acdS knockout mutant showed biocontrol activity and were able to significantly inhibit crown gall formation, with the wild type strain showing slightly better tumor inhibition effects. The mutation of acdS and its regulatory gene lrpL in A. tumefaciens D3 was also found to affect QS signal production of this strain, which indicates a cross talk between the two sets of genes.

Youai Hao (2009). Two of the Mechanims Used by Bacteria to Modify the Environment: Quorum Sensing and ACC Deaminase. UWSpace. http://hdl.handle.net/10012/4820