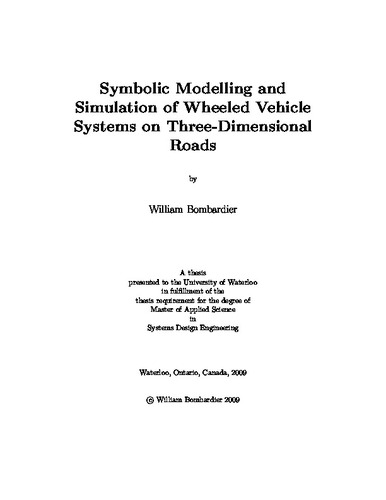 In recent years, there has been a push by automotive manufacturers to improve the efficiency of the vehicle development process. This can be accomplished by creating a computationally efficient vehicle model that has the capability of predicting the vehicle behavior in many different situations at a fast pace. This thesis presents a procedure to automatically generate the simulation code of vehicle systems rolling over three-dimensional (3-D) roads given a description of the model as input. The governing equations describing the vehicle can be formulated using either a numerical or symbolical formulation approach. A numerical approach will re-construct numerical matrices that describe the system at each time step. Whereas a symbolic approach will generate the governing equations that describe the system for all time. The latter method offers many advantages to obtaining the equations. They only have to be formulated once and can be simplified using symbolic simplification techniques, thus making the simulations more computationally efficient. The road model is automatically generated in the formulation stage based on the single elevation function (3-D mathematical function) that is used to represent the road. Symbolic algorithms are adopted to construct and optimize the non-linear equations that are required to determine the contact point. A Newton-Raphson iterative scheme is constructed around the optimized non-linear equations, so that they can be solved at each time step. The road is represented in tabular form when it can not be defined by a single elevation function. A simulation code structure was developed to incorporate the tire on a 3-D road in a symbolic computer implementation of vehicle systems. It was created so that the tire forces and moments that appear in the generalized force matrix can be evaluated during simulation and not during formulation. They are evaluated systematically by performing a number of procedure calls. A road model is first used to determine the contact point between the tire and the ground. Its location is used to calculate the tire intermediate variables, such as the camber angle, that are required by a tire model to evaluate the tire forces and moments. The structured simulation code was implemented in the DynaFlexPro software package by creating a linear graph representation of the tire and the road. DynaFlexPro was used to analyze a vehicle system on six different road profiles performing different braking and cornering maneuvers. The analyzes were repeated in MSC.ADAMS for validation purposes and good agreement was achieved between the two software packages. The results confirmed that the symbolic computing approach presented in this thesis is more computationally efficient than the purely numerical approach. Thus, the simulation code structure increases the versatility of vehicle models by permitting them to be analyzed on 3-D trajectories while remaining computationally efficient.