The Genetic Analysis of Autophagy-Dependent Caspase Activation in Drosophila melanogaster 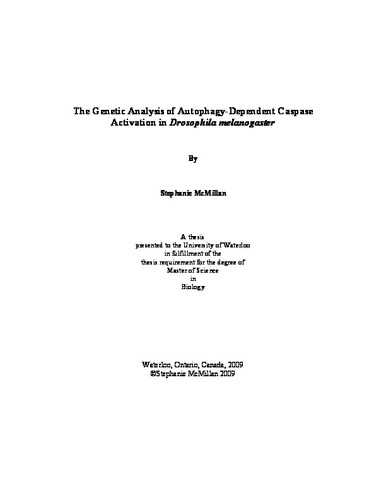 During Drosophila melanogaster pupation, groups of undifferentiated adult cells proliferate and undergo regulated cell shape changes, while larval tissues are eliminated by programmed cell death (PCD). PCD is most commonly associated with apoptosis; however, a growing body of evidence suggests that autophagic cell death represents an alternative form of PCD. In some contexts autophagy can induce caspase-dependent PCD, but the regulatory pathways that link autophagy and apoptosis remain poorly understood. The overexpression of Atg16B induces autophagy-dependent caspase activation in the larval epidermis, and presumptive adult tissues. Also, the overexpression of Atg16B, in tissues specified by pnrGAL4, results in an adult cuticular phenotype that cannot be directly attributed to caspase activity. However, altering the level of Atg16B expression can modulate the adult cuticular phenotype. Therefore, the adult cuticular phenotype was used in a broad based genome-wide screen for dose-dependent modifiers of the regulation of autophagy. To date, 399 chromosomal deficiencies, representing approximately 92% of the 2nd and 3rd chromosomes, and 25 duplications have been tested. Consequently, 42 deficiencies have been identified as dominant enhancers of the Atg16B overexpression phenotype, 24 deficiencies have been identified as dominant modifiers, and 13 deficiencies have been identified as dominant suppressors. Further genetic analysis of these interacting deficiencies was carried out to initiate the process of identifying individual loci associated with the dose-sensitive modification of the Atg16B overexpression phenotype. It is hoped that the identification of these genes will elucidate the genetic pathways regulating autophagy and the autophagic induction of caspase activity.