A Study of Middle Power Diplomacy : as a Strategy of Leadership and Influence 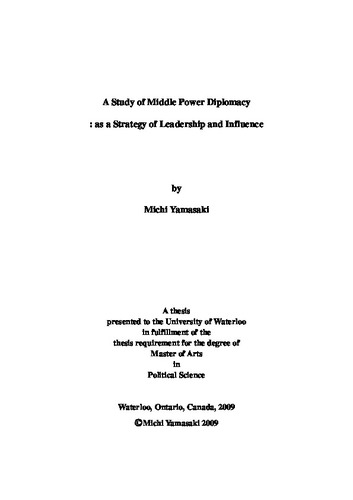 The main goal of this research is to clarify the concept of “middle power” and to employ the idea to understand the diplomatic strategies that allow so called secondary powers, which are countries without substantial national power, to actively exercise remarkable influence in international politics. In general understanding, this diplomacy is called “middle power diplomacy” or “middlepowermanship” which particularly means diplomacy excising influence and taking international initiative through international co-operation and regimes. This diplomacy is distinguishable in that it is not based on overwhelming national power such as military power, but on persuasion and reconciling with other actors. By such activities, some secondary countries achieved considerable involvement, strong influence, and impressive positive reputation in the world despite their intermediate or small national power. This research examines in what conditions some of these secondary powers can employ this type of active international policies and show remarkable influence in certain international issues. Research for this project involved three processes of examination in five chapters on the topic of middlepowemanship, presented in five chapters. Part I of the thesis contains history and literature review of the idea “middle power”. Based on the review of history and literature, this research assumes the middle power diplomacy or middlepowermanship in this research has theoretically four main features. Firstly middlepowermanship means taking leadership employing cooperation with other actors, including other countries and international organizations, and international institutions rather than just its own national power. Secondly, this type of leadership tends to be entrepreneurial or intellectual leadership, which does not always require massive national power and resource input. Thirdly, this diplomatic option is basically available to very wide range of countries, classified as “possible middle powers” in this research, as one of the policy options. Fourthly, the country applying middle power diplomacy does not always describe itself as “middle power”; in addition, the country calling itself “middle power” is not always conducting middle power diplomacy. The political rhetoric “middle power” and middle power diplomacy is not always inter-related. Lastly, only under certain conditions this policy is chosen and successfully practiced. One distinguishable feature of this research is that it is assuming the neither “possible middle powers” nor self-indicated middle powers always apply middle power diplomacy. The “possible middle powers” have middlepowermanship strategy as an available option. The “possible middle powers” have middlepowermanship strategy as an available option and decide whether middlepowemanship strategy is practicable and effective or not on a case by case basis. This research suggested that if “possible middle powers” seek to show strong influence and leadership, they have to select issues and approaches which their limited diplomatic resource can accomplish. For this selection of issues, firstly, there needs to be domestic agreement. In other words, domestic support and available diplomatic resource have to become available on the right political timing. Particularly for “possible middle powers” the constraints and available resources strongly affect the countries’ approaches to the large scale international policy and new projects. Secondly, “possible middle powers” need to persuade other international actors for support and co-operation to excise international leadership because of their limited national and diplomatic capability. In Chapter 5 of this thesis, a case study is presented on Japanese diplomacy on the idea “human security”. Japanese active policies under the name of human security were middlepowemanship because of the three following features. Firstly, Japanese human security policy has been conducted in cooperation with the United Nations and other countries. Secondly, the Japanese government was seeking the entrepreneurial leadership and influence in these policies. Thirdly, the government consistently put emphasis on the aspect of “freedom from want” of human security and limited its initiative to economy related issues. This case study focuses on factors underlying the policy decision choosing middlepowermanship. Prime Minister Obuchi’s leadership backed up his intellectual advisors who were supporting the idea of “human security” matched the political timing brought by the Asian financial crisis and the Ottawa Process in 1997. The constraints and available diplomatic resources led the Japanese government to take the middlepowermanship approach. The government had certain constraints due to the constitutional restraints in military activities and complexity of relationships with neighboring countries. These restrictions on the approaches resulted in Japan pursuing limited initiative only on economy related issues even though the idea of human security contains “freedom from want” and “freedom from fear.” Combining with the existing Japanese Official Development Assistance (ODA) policies and upcoming ODA policy reform realized the human security as a large scale international initiative, such as the Trust Found for Human Security. In the international sphere, support from other countries and the UN made it possible for Japan to conduct such large scale international policy conducted by Japan.