The Periscope and The Labyrinth 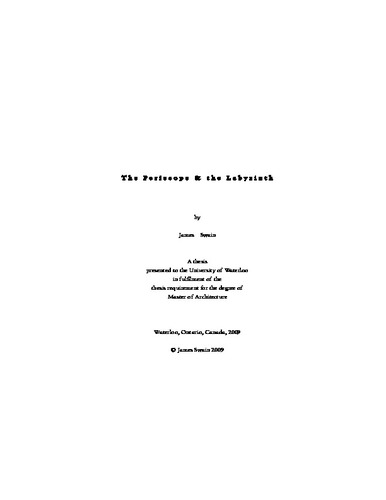 The Periscope and the Labyrinth is an investigation into cultural identity, consciousness and landscape rooted in the body’s experience of the city. The modern phenomenon of ﬂânerie is used as a means of examining vari- ous sites of particular interest to queer mythology within New York and Rome via the device of personal ‘derives’ or drifts inspired by a legacy of city writing, whereby the particular relationship between identity, place and space becomes clear. The ﬂâneur has been essential to previous writings on the topic of ‘queer space’ in that he is one who ‘relies on the ambiguities of the modern city, and the uncertainties that linger in the ﬂeeting experi- ence of a backward glance.’ It is these very ambiguities that associate the ﬂâneur as the quintessential ‘cruiser.’ Yet the potential of the ﬂâneur lies in his ‘alchemical’ abilities. A contemporary interpretation of alchemy is used through out the thesis as both a psychological method for understand- ing the ‘union of opposites’, as well as a reading of the parallels between individual and collective identity as they relate to particular sites. These archetypal opposites are typiﬁed by the Greek gods Apollo and Dionysus; the duality of their characteristics exempliﬁed by the metaphor of the title in which the conscience of the ‘Apollonian eye’ of the ﬂâneur within the labyrinth of the Dionysian underworld’ describing the alchemical teachings which underpin this work.