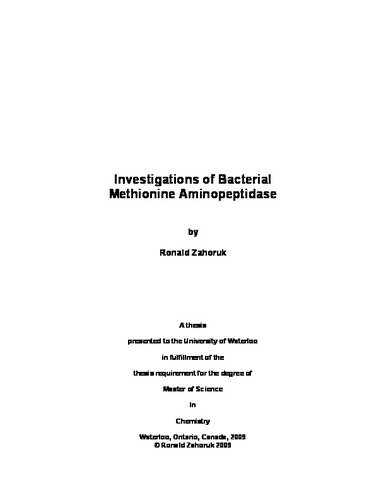 The pathway representing methionine integration and excision is an increasingly important target in drug design. Methionine aminopeptidase (MetAP), a metalloprotease responsible for cleaving the N-terminal methionine from nascent peptides, has been the object of many studies aimed to produce potential anti-bacterial, anti-fungal and anti-angiogenic agents. Though clinical trials are underway for several of these compounds, like fumagillin and CKD-731, they are still flawed based on their relatively weak inhibition and their physiological side effects. Therefore, the search for novel and potent inhibitors continues. Previous work has utilized phosphinic and phosphonic acid derivatives of methionine in co-crystallization studies with Escherichia coli MetAP (eMetAP). The aim of the research presented in this work is to study and assay various phosphorus- and sulfur-containing compounds as inhibitors and substrates in an effort to learn more about the biochemical machinery underlying MetAP catalysis. As well, we outline a predictive molecular modeling approach to MetAP inhibitor design to assist in identifying lead candidates amongst a body of possible molecular inhibitors. Ultimately, we not only hope to have identified key functional properties of molecules potentially useful as MetAP inhibitors, but also to have contributed to the knowledge base of the mechanistic features involved in this enzyme’s catalysis.