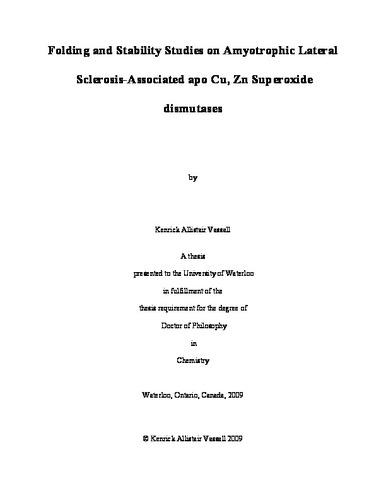 Amyotrophic lateral sclerosis (ALS) is a debilitating, incurable, neurodegenerative disease characterized by degradation of motor neurons leading to paralysis and ultimately death in ~3-5 years. Approximately 10% of ALS cases have a dominant inheritance pattern, termed familial ALS (fALS). Mutations in the gene encoding the dimeric superoxide scavenger Cu, Zn superoxide dismutase (SOD), were found to be associated with ~20% of fALS cases. Over 110 predominantly missense SOD mutations lead to fALS by an unknown mechanism; however, it is thought that mutant SOD acquires a toxic gain of function. Mice as well as human post mortem studies have identified mutant SOD-rich aggregates in affected neurons, leading to the hypothesis that mutations in SOD increase the tendency of the protein to form toxic aggregates. SOD has a complex maturation process whereby the protein is synthesized in an apo or demetalated state, followed by formation of an intramolecular disulfide bond and binding of Zn2+ and Cu2+. Each of these post-translational modifications increases the stability of the protein. SOD has been shown to aggregate more readily from destabilized immature states, including the apo state both with and without the disulfide bond, highlighting the importance of these states. Thermal unfolding monitored by differential scanning calorimetry (DSC) and chemical denaturation monitored by optical spectroscopy were used to elucidate the folding mechanism and stability of both the apo SOD disulfide-intact and disulfide-reduced states. Chemically and structurally diverse fALS-associated mutants were investigated to gain insights into why mutant SODs may be more prone to misfold and ultimately aggregate. The mutations were introduced into a pseudo wild-type (PWT) background lacking free cysteines, resulting in highly reversible unfolding amenable to accurate thermodynamic analysis. Similarly to what was previously described for fully metallated (holo) SODs, chemical denaturation of the apo disulfide-intact SODs is well described by a 3-state dimer mechanism with native dimer, monomeric intermediate and unfolded monomer populated at equilibrium. Although removal of metals has a relatively small effect on the stability of the dimer interface, the stability of the monomer intermediate is dramatically reduced. Thermal unfolding of some disulfide-intact apo SOD mutants as well as PWT is well described by a 2-state dimer mechanism, while others unfold via a 3-state mechanism similar to chemical denaturation. All but one of the studied disulfide-intact apo mutations are destabilizing as evidenced by reductions in ΔG of unfolding. Additionally, several mutants show an increased tendency to aggregate in thermal unfolding studies through increased ratios of van’t Hoff to calorimetric enthalpy (HvH/ Hcal ). The effects of the mutations on dimer interface stability in the apo disulfide-intact form were further investigated by isothermal titration calorimetry (ITC) which provided a quantitative measure of the dissociation constant of the dimer (Kd). ITC results revealed that disulfide-intact apo SOD mutants generally have increased Kd values and hence favor dimer dissociation to the less stable monomer which has been proposed to be a precursor to toxic aggregate formation. Reduction of the disulfide bond in apo SOD leads to marked destabilization of the dimer interface, and both thermal unfolding and chemical denaturation of PWT and mutants are well described by a 2-state monomer unfolding mechanism. Most mutations destabilize the disulfide-reduced apo SOD to such an extent that the population of unfolded monomer under physiological conditions exceeds 50%. The disulfide-reduced apo mutants show increased tendency to aggregate relative to PWT in DSC experiments through increased HvH /Hcal, low or negative change in heat capacity of unfolding and/or decreased unfolding reversibility. Further evidence of enhanced aggregation tendency of disulfide-reduced apo mutants was derived from analytical ultracentrifugation sedimentation equilibrium experiments that revealed the presence of weakly associated aggregates. Overall, the results presented here provide novel insights into SOD maturation and the possible impact of stability on aggregation.