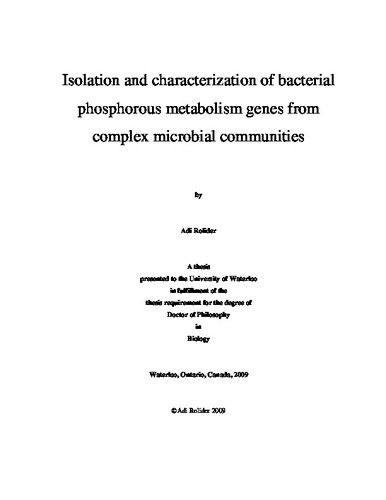 Phosphorous (P) is an essential nutrient, playing a central role in the life of a bacterial cell. It is involved in cellular metabolic pathways, cell signaling and is a component of many of the cell’s macromolecules. Since a majority of the biosphere’s microorganisms have not yet been cultured, much more can be learned about the biochemical and genetic mechanisms that govern bacterial P metabolism. The function-driven approach to metagenomics was applied to study P metabolism in the bacterial communities present in pulp and municipal wastewater treatment plant activated sludge and soil, leading to the isolation and identification of three new phosphatases, genes involved in P transport, regulation of P related functions and additional genes which may be important for the bacterial cell’s adaptation to the above communities. The identification of two new nonspecific acid phosphatases (NSAPs) phoNACX6.13 and phoNBCX4.10 and an alkaline phosphatase, phoAACX6.71, belonging to the nucleotide pyrophosphatase phosphodiesterase (NPP) family is reported here. The genes for the three phosphatases were cloned, sequenced, and analysed for upstream regulatory sequences in addition to biochemical characterization of their protein products. PhoB-binding sites were found upstream to phoAACX6.71 and NSAP phoNACX6.13, suggesting these genes are governed by the mechanisms of the previously described “pho” regulon. The two NSAPs have pH optima in the acidic neutral range while the alkaline phosphatase has an optimal pH at 9.5. The three phosphatases appear to be distantly related to known bacterial phosphatase enzymes. Phylogenetic analysis shows the newly identified NSAPs appear on a separate clade from known bacterial NSAPs. Key amino acid residues involved in the catalytic site of these NSAPs were identified in PhoNACX6.13 and PhoNBCX4.10.In PhoAACX6.71, key amino acid residues involved in catalysis and metal cofactor coordination were identified. The roles of these residues were confirmed based on the predicted molecular structure of these proteins. The structures indicate the three proteins are globular with folding patterns suitable for catalytic residues to bind and cleave the P substrate. This is the first report of functional characterization of phosphatases from uncultured bacteria. In addition to exploring the hydrolysis of phosphate esters, the transport and metabolism of other P compounds was also investigated. By phenotypic complementation of phosphonate growth deficient mutants of the legume symbiont, Sinorhizobium meliloti and large scale sequencing of selected metagenomic clones, 92 ORFs were isolated. As expected, about 25% of these ORFs are P transport proteins and P related regulators. Genes involved in other regulatory functions made up about 12% of the total while genes related to Nitrogen metabolism and assimilation account for about 8% of the newly identified ORFs. About 30% of the ORFs encoded general cellular functions or hypothetical proteins of unknown function. The results of this investigation demonstrate the effectiveness of functional metagenomics in studying genetic diversity of bacteria inhabiting complex microbial communities and in identifying new proteins of interest.