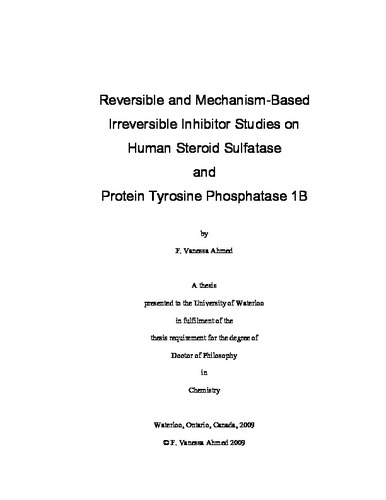 The development of reversible and irreversible inhibitors of steroid sulfatase (STS) and protein tyrosine phosphatase 1B (PTP1B) is reported herein. STS belongs to to the aryl sulfatase family of enzymes that have roles in diverse processes such as hormone regulation, cellular degradation, bone and cartilage development, intracellular communication, and signalling pathways. STS catalyzes the desulfation of sulfated steroids which are the storage forms of many steroids such as the female hormone estrone. Its crucial role in the regulation of estrogen levels has made it a therapeutic target for the treatment of estrogen-dependent cancers. Estrone sulfate derivatives bearing 2- and 4-mono- and difluoromethyl substitutions were examined as quinone methide-generating suicide inhibitors of STS with the goal of developing these small molecules as activity-based probes for proteomic profiling of sulfatases. Kinetic studies suggest that inhibition by the monofluoro derivatives is a result of a quinone methide intermediate that reacts with active-site nucleophiles. However, the main inhibition pathway of the 4-difluoromethyl derivative involved an unexpected process in which initially formed quinone methide diffuses from the active site and decomposes to an aldehyde in solution which then acts as a potent, almost irreversible STS inhibitor. This is the first example where this class of inactivator functions by in situ generation of an aldehyde. 6- and 8-mono- and difluoromethyl coumarin derivatives were also examined as quinone methide-generating suicide inhibitors of STS. The 6-monofluoromethyl derivative acted as a classic suicide inhibitor. The partition ratio of this compound was found to be very large indicating that this class of compounds is not likely suitable as an activity-based probe for proteomic profiling of sulfatases. Boronic acids derived from steroid and coumarin platforms were also examined as STS inhibitors with the goal of improving our understanding of substrate binding specificity of STS. Inhibition constants in the high nanomolar to low micromolar range were observed for the steroidal derivatives. The coumarin derivatives were poor inhibitors. These results suggest that the boronic acid moiety must be attached to a platform very closely resembling a natural substrate in order for it to impart a beneficial effect on binding affinity compared to its phenolic analog. The mode of inhibition observed was reversible and kinetic properties corresponding to the mechanism for slow-binding inhibitors were not observed. PTP1B catalyzes the dephosphorylation of phosphotyrosine residues in the insulin receptor kinase and is a key enzyme in the down regulation of insulin signaling. Inhibitors of PTP1B are considered to have potential as therapeutics for treating type II diabetes mellitus. The difluoromethylenesulfonic (DFMS) acid group, one of the best monoanionic phosphotyrosine mimics reported in the literature, was examined as a phosphotyrosine (pTyr) mimic in a non-peptidyl platform for PTP1B inhibition. The DFMS-bearing inhibitor was found to be an approximately 1000-fold poorer inhibitor than its phosphorus analogue. It was also found that the fluorines in the DFMS inhibitor contributed little to inhibitory potency. In addition, [sulfonamido(difluoromethyl)]-phenylalanine (F2Smp) was examined as a neutral pTyr mimic in commonly used hexapeptide and tripeptide platforms. F2Smp was found to be a poor pTyr mimic. These inhibition studies also revealed that the tripeptide platform is not suitable for assessing pTyr mimics for PTP1B inhibition. Taken together, the kinetic data on the inhibition of STS and PTP1B provide valuable information relevant for future design of inhibitors of these two therapeutic targets.