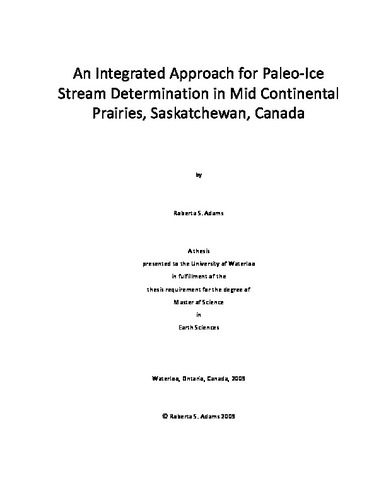 Ice stream research has gained momentum in the last decade due to the increased need to understand ice sheet dynamics and instability and, by extension, the role ice streams have on climate change and sea level rise. Although significant progress has been made recently in understanding the role of ice streams in ice sheet dynamics, much remains to be done for documenting and understanding paleo-ice stream records. This is especially true for terrestrial paleo-ice streams like those that operated in the southwest Laurentide Ice Sheet. In previous studies evidence was shown for at least two large paleo-ice stream systems in southern Saskatchewan and a model was proposed involving major glacial dynamics shifts during the Late Wisconsinan linked to ice streaming in the Prairies. The goal of this research is to further characterize drift provenance and to verify sediment-landform assemblages that are central to the proposed reconstruction. This is done through spatial analysis of sediment and landform characteristics (e.g. compositional data, till fabric, landform identification). Provenance is also investigated using radiometric data and 40Ar/39Ar dating of hornblende grains. All of the data are geo-referenced in GIS to examine the spatial relationships. Results show spatially consistent patterns that fit within the structure of the proposed ice stream model. Ten assemblages were delineated, some showing landform evidence of southwestern and southeastern flow, while others show an older western signature through compositional data. The ice flow dynamics were characterized by a combination of landform evidence and compositional data, where three distinct ice flow phases can be seen. Of these three flow phases, two can be characterized by paleo-ice streams. The older south westward Maskwa system flowed against the regional slope, creating a large area of mega-scale glacial lineations, as well as transverse ridges, and was bound on either side by hummocky terrain. The preservation of the southwest Maskwa system was due to the abrupt shift to the southeastward Buffalo system. The Buffalo system captured the subglacial water from the Maskwa causing its shutdown, which fed the James Lobe until it collapsed. The Buffalo paleo-ice stream was the youngest and least stable of the two systems, as shown in the cross-cutting landform evidence. This approach combines multiple methods of analysis to go beyond the geomorphologic evidence to test the main underlying assumptions of paleo-ice stream landsystem models. This is critical if we are to understand the processes involved in the formation of paleo-ice streams and to reconstruct their evolution. Further characterization of the paleo-ice stream systems in the Prairies is critical to improve our understanding of how large ice sheets, like the Laurentide Ice Sheet, evolved and eventually collapsed.