Deliberation, Distraction, and the role of the unconscious in Multiple Cue Probability Learning 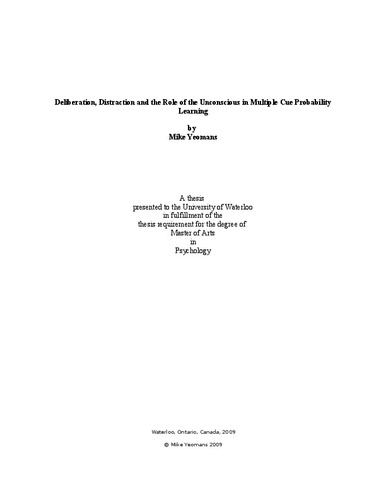 Many findings in cognitive psychology suggest that many decisions and judgments rely on processes that are unconscious, that these processes can be disrupted by conscious input, leading to poor decision making. A commonly paradigm has shown that decision makers who are distracted while deciding make better to make quick decisions. The distraction is thought to facilitate spontaneous unconscious processing, called the “deliberation without attention effect”, that lead to better decisions when the question is later revisited. This effect was tested in three studies on diagnostic judgments in a multiple cue probability learning paradigm. In three studies, the effect of rushed decision making, forced deliberation, and distraction were tested on probability judgments, and on choices and confidence judgments. Evidence suggested that subjects in the immediate decision were less accurate than the other conditions, in decisions and judgments, despite higher levels of confidence, but equaled performance in other conditions when given make-work tasks in between decisions, which may have primed more careful or more deliberate thinking. The results did not make any strong theoretical implications for the deliberation without attention effect.