The Rhetoric of Silence: John Cage, Exigence and the Art of the Commonplace 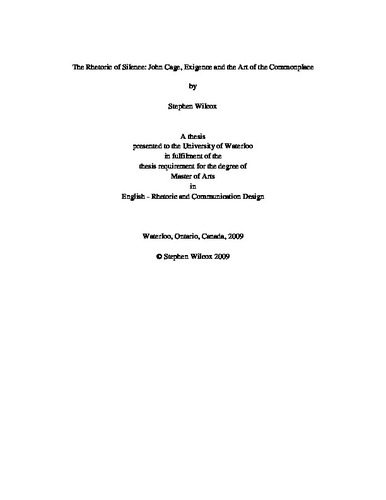 This thesis approaches the work of American avant-garde composer John Cage from an unconventional perspective by utilizing rhetorical theory to examine the intellectual history informing his collected writings in the text Silence (1961). That historical period encompasses the whole of the commonplace art movement, which sought to have everyday items and experiences supplant art objects. In applying Lloyd F. Bitzer’s theory of the rhetorical situation to the history of the art of the commonplace, a new concept of influence between artists emerges, one where exigences and situations shape popular notions of art. Briefly stated, a recurring exigence appeared throughout this period, bringing with it the necessary parameters for the inclusion of the commonplace within the realm of the art. From William Wordsworth, Walt Whitman, and Ralph Waldo Emerson through to Marcel Duchamp and Andy Warhol, this exigence can be seen constraining the actions of artists towards a fitting, persuasive method. It is in John Cage that one finds this new method. Demonstrated through numerous examples of Cage’s work, this methodology skews the traditional perception of the artist, forgoing the ego, invoking indeterminacy and using structure to emphasize the process of composition itself. This enabled pieces of music and writing that lacked any discernable intention and therefore invited readers to engage the material therein for what it was originally: sounds and words. The result is, at long last, a persuasive and compelling reason to accept commonplace experiences alongside art works and it is evidenced by the Pop movement that would follow shortly thereafter.