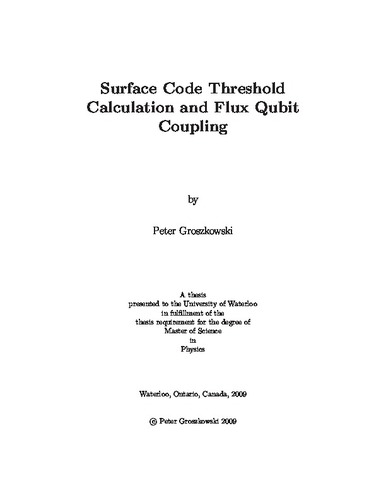 Building a quantum computer is a formidable challenge. In this thesis, we focus on two projects, which tackle very different aspects of quantum computation, and yet still share a common goal in hopefully getting us closer to implementing a quantum computer on a large scale. The first project involves a numerical error threshold calculation of a quantum error correcting code called a surface code. These are local check codes, which means that only nearest neighbour interaction is required to determine where errors occurred. This is an important advantage over other approaches, as in many physical systems, doing operations on arbitrarily spaced qubits is often very difficult. An error threshold is a measure of how well a given error correcting scheme performs. It gives the experimentalists an idea of which approaches to error correction hold greater promise. We simulate both toric and planar variations of a surface code, and numerically calculate a threshold value of approximately $6.0 \times 10^{-3}$, which is comparable to similar calculations done by others \cite{Raussendorf2006,Raussendorf2007,Wang2009}. The second project deals with coupling superconducting flux qubits together. It expands the scheme presented in \cite{Plourde2004} to a three qubit, two coupler scenario. We study L-shaped and line-shaped coupler geometries, and show how the coupling strength changes in terms of the dimensions of the couplers. We explore two cases, the first where the interaction energy between two nearest neighbour qubits is high, while the coupling to the third qubit is as negligible as possible, as well as a case where all the coupling energies are as small as possible. Although only an initial step, a similar scheme can in principle be extended further to implement a lattice required for computation on a surface code.