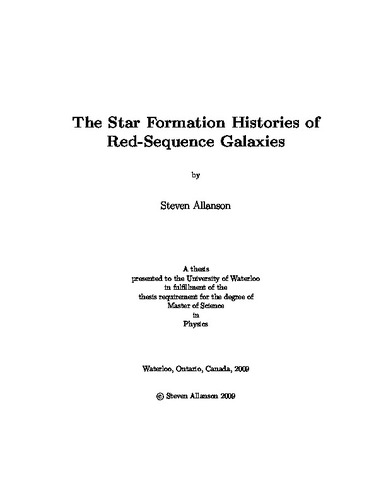 This thesis addresses the challenge of understanding the typical star formation histories of red sequence galaxies, using linestrength indices, mass-to-light ratios and redshift evolution as complementary constraints on their stellar age distribution. We first construct simple parametric models of the star formation history that bracket a range of scenarios, and fit these models to the linestrength indices of low-redshift cluster red-sequence galaxies. For giant galaxies, we con firm the downsizing trend, i.e. the stellar populations are younger, on average, for lower σ galaxies. We find, however, that this trend flattens or reverses at σ < 70km/s. We then compare predicted stellar mass-to-light ratios with dynamical mass-to-light ratios derived from the Fundamental Plane, or by the SAURON group. For galaxies with σ ~ 70 km/s, models with a late 'frosting' of young stars and models with exponential star formation histories have stellar mass-to-light ratios that are larger than observed dynamical mass-to-light ratios by factors of 1.7 and 1.4, respectively, and so are rejected. The single stellar population (SSP) model is consistent with the Fundamental Plane, and requires a modest amount of dark matter (between 20% to 30%) to account for the difference between stellar and dynamical mass-to-light ratios. A model in which star formation was 'quenched' at intermediate ages is also consistent with the observations, although in this case less dark matter is required for low mass galaxies. We also find that the contribution of stellar populations to the 'tilt' of the Fundamental Plane is highly dependent on the assumed star-formation history: for the SSP model, the tilt of the FP is driven primarily by stellar-population effects. For a quenched model, two-thirds of the tilt is due to stellar populations and only one third is due to dark matter or non-homology. Comparing to high redshift cluster data, we find again the SSP and quenched models, as well as a model where strangulation begins at intermediate ages after a period of constant star formation, are preferred. They predict the recent faint-end build up of the red sequence, along with observed dwarf-to-giant ratios. Only the SSP model appears to predict the observed M/L evolution, but only if selection effects are carefully modeled.