Effects of task variation and communication medium on group performance in small groups: a comparison between FTF and CMC groups 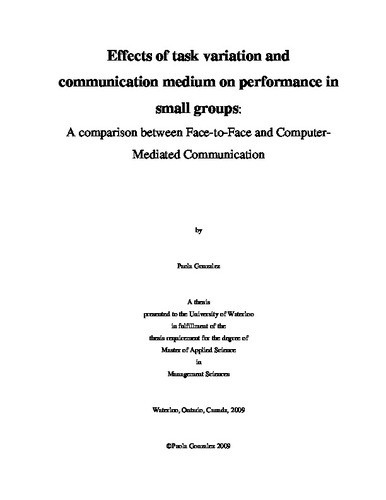 Organizational support for cooperative work has been shifted from using Face-to-Face (FTF) communication in collocated groups to using Communication-Mediated-Communication (CMC) in dispersed groups. This new and growing form of communication has stimulated scholars to study the differences of group performance between FTF and CMC. Task categorization has been the methodology chosen for several empirical research studies. These studies conclude that the effectiveness of a communication medium for a given task depends on the degree to which there is a fit between the richness of information that can be transmitted via a system’s technology and the information richness requirements of that task. However, there are numerous problems associated with using task categorization in such studies. One of these limitations is that categorization forces the researcher to enclose a task situation into a general predetermined category that may not describe the real nature of the activity. For instance, task categorization does not capture the dynamic interaction of groups performing tasks that involve variation. This thesis discusses the weakness and limitations of this approach and, using conclusions drawn from experimental results, propose the adoption of a more systematic approach based on the concept of Ashby’s law of requisite variety. Findings on the differences in performance of FTF groups versus CMC groups of 39 three-person groups of engineering undergraduate students revealed that the group performance was not affected by the communication medium but rather by variation in the task (low and high complexity).