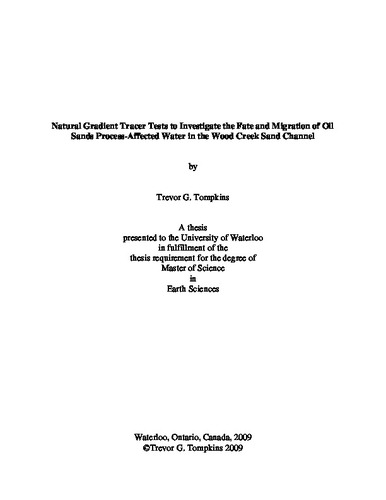 The In Situ Aquifer Test Facility (ISATF) has been established on Suncor Energy Inc’s (Suncor) oil sands mining lease north of Fort McMurray, Alberta to investigate the fate and transport of oil sands process-affected (PA) water in the Wood Creek Sand Channel (WCSC) aquifer. In 2008, the ISATF was used for preliminary injection experiments in which 3,000 and 4,000 L plumes of PA water were created in the WCSC. Following injection, the evolution of the plumes was monitored to determine if naphthenic acids (NAs) naturally attenuated in the WCSC and if trace metals were mobilized from the aquifer solids due to changes in redox conditions. Post-injection monitoring found groundwater velocities through the aquifer were slow (~3-10 cm/day) despite hydraulic conductivities on the order of 10-3 m/s. While microbes in the WCSC were capable of metabolizing acetate under the manganogenic/ferrogenic redox conditions, field evidence suggests naphthenic acids behaved conservatively. Following the injections, there was an apparent enrichment in the dissolved concentrations of iron, manganese, barium, cobalt, strontium and zinc not attributable to elevated levels in the PA injectate. Given the manganogenic/ferrogenic conditions in the aquifer, Mn(II) and Fe(II) were likely released through reductive dissolution of manganese and iron oxide and oxyhydroxide mineral coatings on the aquifer solids. Because naphthenic acids make up the bulk of dissolved organic carbon (DOC) in the injectate and are apparently recalcitrant to oxidation in the WCSC, some question remains as to what functioned as the electron donor in this process.