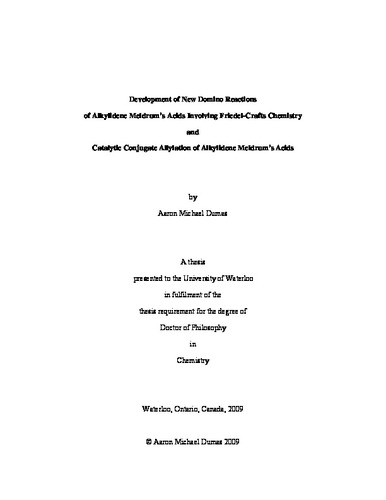 Alkylidene Meldrum’s acids are very reactive acceptors in conjugate additions, and are known to be significantly more electrophilic than other α,β-unsaturated carbonyl electrophiles. They also offer advantages in terms of ease of preparation, purification and storage. Despite this, they are relatively underused in organic synthesis, and have been treated as something of a curiousity in the literature. The goal of my research was to demonstrate the utility of these molecules in new reactions that are not readily available to other electrophiles. To facilitate this work, new conditions for the Knoevenagel condensation of aldehydes with Meldrum’s acid were developed. This allowed access to a broader range of monosubstituted alkylidenes than was previously possible from any single method. In a reaction that exploits the acylating ability of Meldrum’s acid, a domino addition of phenols to alkylidene Meldrum’s acids was developed. Here, Yb(OTf)3 catalyzed the addition of a phenol to the alkylidene as well as acylation through activation of the electrophile. The unique properties of these acceptors permitted synthesis of 3,4-dihydrocoumarins and coumarins through C-alkylation/O-acylation, and also 4-chromanones and chromones through O-alkylation/C-acylation. The predictable and general reversal of chemoselectivity is dependent on the number of substituents on the alkylidene. The same properties that make alkylidene Meldrum’s acids strong electrophiles also make them excellent dienophiles. A one-pot Diels-Alder/Friedel-Crafts process was used as an entry into the 6-5-6-tricyclic skeleton of a family of natural products that have been of interest in our group. The modular nature of the reaction allowed structural variation at nearly every position around both 6-membered rings. An attempted extension of this work into the synthesis of ergot alkaloids provided insight into the factors affecting Friedel-Crafts acylation of 4-substituted indoles. These results provided a highly regioselective entry into 4,5-fused indole ring systems. The electrophilicity of alkylidene Meldrum’s acids was combined with Lewis acid activation for development of a mild conjugate allylation reaction. The use of allyltriphenyltin as nucleophile for addition to monosubstituted alkylidenes avoided many of the practical disadvantages of working with trialkylstannanes. By employing such a relatively weak allylating agent, functional group compatibility was maximized to include groups susceptible to nucleophilic allylation. Additions to chiral, non-racemic alkylidenes were highly diastereoselective. It was also shown that functionalized all-carbon quaternary stereocentres can be formed by this process.